La Junta is the Municipality that is the county seat and the most populous municipality of Otero County, Colorado, United States. The city population was 7,077 at the 2010 United States Census. La Junta is located on the Arkansas River in southeastern Colorado east of Pueblo.

La Junta (Spanish for "the junction") was named for the fact it rested at the intersection of the Santa Fe Trail and a pioneer road to Pueblo. The town developed near Bent's Post, a fur trading post of the 19th century.

During World War II, La Junta had an Army Air Force Training Base outside town. An Air Force detachment of the Strategic Air Command remained there until modern flight simulators developed in the 1980s rendered live flight unnecessary for pilot training maneuvers. At least one military aircraft crashed close by during such training maneuvers. 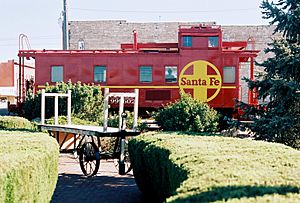 This railroad caboose serves as the drive-up window for The State Bank.

The Caboose (pictured here) is the drive-through for the State Bank, which was established in 1893. The bank has been remodeled with antiques, including a teller line from the late 1890s.

There were 2,977 households out of which 33.7% had children under the age of 18 living with them, 47.0% were married couples living together, 14.7% had a female householder with no husband present, and 34.0% were non-families. 30.9% of all households were made up of individuals and 15.0% had someone living alone who was 65 years of age or older. The average household size was 2.44 and the average family size was 3.06.

All content from Kiddle encyclopedia articles (including the article images and facts) can be freely used under Attribution-ShareAlike license, unless stated otherwise. Cite this article:
La Junta, Colorado Facts for Kids. Kiddle Encyclopedia.