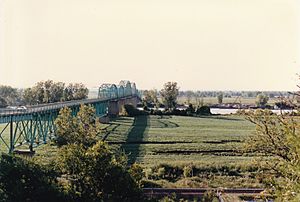 Lexington Bridge over the Missouri River

Lexington is a city in and the county seat of Lafayette County, Missouri. The population was 4,726 at the 2010 census. Located in western Missouri, Lexington lies approximately 40 miles (64 km) east of Kansas City and is part of the Greater Kansas City Metropolitan Area. It is the home of the Battle of Lexington State Historic Site, and of the former Wentworth Military Academy and College, which operated from 1880 to 2017. 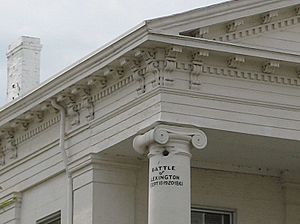 Cannonball from the 1861 Battle of Lexington lodged in the upper left column of the Lafayette County Courthouse. 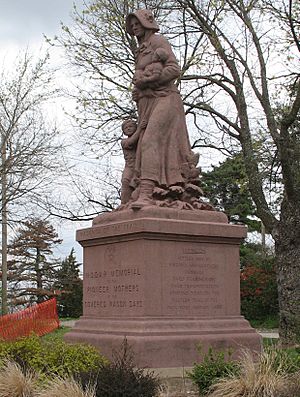 Madonna of the Trail monument on the edge of downtown Lexington, which was dedicated by Harry S. Truman in 1928.

Lexington, Missouri, located on the bluffs of the Missouri River, was platted in 1822, near William Jack's Ferry, which had been established three years earlier on the south bank of the river. It was named in commemoration of the Battle of Lexington. The first ferry was established in 1819 by Lexington's founder, Gilead Rupe. In 1823, Lexington became the county seat of Lafayette County and grew rapidly.

Growth as a trading center

John Aull opened a mercantile store in 1822, and he was soon joined by his brothers James and Robert Aull. The Aull Brothers firm soon had a frontier chain, also operating stores in Independence, Westport, and Liberty. Other merchants came, as did farmers and planters who specialized in hemp, tobacco and cattle.

With the emphasis on trade and agriculture, Lexington and Lafayette County also had one of the largest slave populations in the state. Many homes in town still have the old slave quarters behind them.

Lexington was a bustling and prosperous city, the largest city west of St. Louis in the 1830s and '40's. During that period, it was the major center for merchants and outfitters as trappers, traders, and emigrants prepared to travel westward on the Santa Fe Trail, California Trail, Oregon Trail, and the Mormon Trail to Utah. Goods sent west from Lexington were valued at $450,000 in 1843. Rope walks, slaughter houses, a foundry and a furniture factory were among other early Lexington industries. In the 1840s, Russell, Majors and Waddell, the largest trading firm in the West, established its headquarters on Main Street. In the 1850s, these three men had 3500 wagons carrying goods from Missouri to Sacramento, Denver, and other points, and in 1860, they would found the Pony Express.

The steamboat trade on the river became a hugely profitable investment, and the wharf was a center of commerce. In 1852, one of the worst steamboat accidents in Missouri history occurred at Lexington. The side-wheeler Saluda (steamship) was carrying 250 Mormons en route to Salt Lake City when its boilers exploded, killing over 150 people. Many children orphaned by the blast were adopted by Lexingtonians. Productive coal mines, among the first in the state, were dug into the surrounding river bluffs to provide fuel for river steamers.

Lexington was also noted for its architecture, especially in its public buildings. The Greek Revival Lafayette County Courthouse, built in 1847 on Main Street, is the oldest courthouse in continuous use west of the Mississippi. The Masonic College, also built in the Greek Revival style, operated from 1847 to 1857, and after the Civil War, it housed the Central College for Women. The Gothic Revival Christ Episcopal Church, built in 1848, has an interior finished in walnut and a ceiling ornamented with a Gothic truss arch. Lexington is still home to over 150 homes and public buildings built before the Civil War, and annually holds well-attended tours of its historic homes and buildings.

Lexington was the site of two of the largest battles in the western campaign of the American Civil War. The better-known Battle of Lexington is commonly referred to as the Battle of the Hemp Bales. On September 12, 1861, between 6,000 and 10,000 soldiers of the Missouri State Guard, led by Major General Sterling Price, began a siege against the Federal military post in the old Masonic College commanded by Colonel James A. Mulligan.

On September 18, Price's army mounted an assault. Some of Price's army used hemp bales as moving breastworks while they moved up the river bluffs and closed in on Mulligan's headquarters. On September 20, 1861, Mulligan's troops surrendered. Combined casualties were 73 dead, 270 wounded. The battlefield on the bluffs of the Missouri River is now a state park, and the cannonball stuck in one of the upper pillars of the Courthouse has become a symbol for the town.

The Second Battle of Lexington occurred during Price's Missouri Expedition on October 19, 1864.

Lexington was known as a center for Quantrill's Raiders during the war. Two months after the Civil War ended, many of these guerrilla fighters who had refused to honor the cease fire finally decided to take advantage of the special Federal amnesty that was declared for such forces and turn themselves in at Lexington. While riding into town, reportedly under a white flag, they were fired upon by Union soldiers from the 2nd Wisconsin Cavalry, and Jesse James was severely wounded in the right lung. Some credit this event as a major contributing factor to his post-war career as a legendary bank robber. It is likely not a coincidence that the James-Younger Gang targeted the Alexander Mitchell bank in Lexington for the second daylight bank robbery in United States history. In December 1866, Archie Clement, an accomplice of the James brothers and perhaps the most notorious of all the guerrilla fighters, terrorized the town and was shot from his horse and killed by a sniper perched in the second floor of the Courthouse.

Athens of the West

Lexington never returned to its pre-war prominence, replaced by Kansas City as the most important city in western Missouri. Particularly harmful was arrival of the transcontinental railroad, which supplanted the river commerce. A number of institutions of higher education were established, leading the town to bill itself as the “Athens of the West.”. Especially significant were three schools for women, the Elizabeth Aull Seminary, Lexington Ladies College, and Central College for Women. Wentworth Military Academy, founded in 1880, still draws students from throughout the country and around the world today.

Until the 1980s Lexington was the headquarters and main distribution point for Mattingly's/Matco Stores, which was purchased by P.M. Place Stores. In 2000 the Place's stores were purchased by ShopKo to be converted into Pamida stores. In 2004 the former Mattingly warehouse was sold by Pamida. In August 2004 liquidation of the former Matco #101, then a Pamida, began and the store was closed by the end of October. This was the end of the Mattingly store legacy in Lexington. Hugh Mattingly had been a mentor to Wal-Mart founder, Sam Walton.

Lexington is a location for the Maid-Rite restaurant franchise, famous in the midwestern United States for its loose meat hamburgers and other traditional diner fare.

Dunbrooke began as a dress shirt company in 1939 in Lexington, Missouri has grown to become one of the nation’s premiere logoed apparel manufacturers. Over the past 65 years, the company has borne witness to several changes, encompassing everything from its products to its name. The company has manufactured several types of apparel, from dress shirts to bowling shirts to nylon gym shorts and jackets. Dunbrooke’s signature jacket line had its beginnings in the 1950s when the company was under government contract to produce nylon jackets for the Korean War. The company’s name also underwent several transformations from its original name “Dunhill” (1939) to “Dunbrooke Shirt Company” (1963) to “Dunbrooke Sportswear” (1971) to Dunbrooke Apparel Corp (2003). The current managers purchased Dunbrooke from parent company American Marketing Industries (AMI) in October 2003. Under its new ownership, Dunbrooke today maintains two offices – corporate headquarters in Independence, MO, and a modern decorating and distribution center located in El Dorado Springs, MO, built in 1998

Lexington has a public library, a branch of the Trails Regional Library.

All content from Kiddle encyclopedia articles (including the article images and facts) can be freely used under Attribution-ShareAlike license, unless stated otherwise. Cite this article:
Lexington, Missouri Facts for Kids. Kiddle Encyclopedia.