Kids Encyclopedia Facts
Not to be confused with Big Sugar Creek.

Sugar Creek is a city in Clay and Jackson counties in the U.S. state of Missouri. The population was 3,345 at the 2010 census. 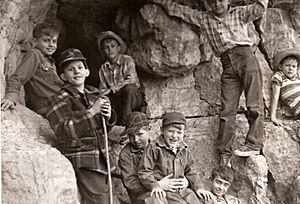 Kids exploring the Jesse James Cave, high on the bluffs overlooking the Missouri River near Sugar Creek, Missouri in 1950.

Like many cities along the Missouri River, Sugar Creek shows evidence of having once been the home of the Osage people. The city takes its name from nearby Sugar Creek.

On June 25, 1804, the Lewis and Clark Expedition camped on an island in the Missouri River opposite what is modern day Sugar Creek.

In the mid-1800s, the area now known as Sugar Creek served as an important link in America's westward expansion. Known as Upper Independence Landing originally, the territory along the Missouri River served as a port to receive supplies for early pioneers. It was renamed Wayne City Landing after an army lieutenant, Anthony Wayne. Wayne City, which is now on the national historic register, also received travelers who were headed west along the Oregon, California and Santa Fe Trails. In 1850, the first railroad west of the Mississippi River was constructed to join Wayne City and nearby Independence, Missouri.

From the early 1890s to the 1930s, the Sugar Creek area was home to a first-class pleasure resort, Fairmount Park. Among the park's attractions were a hotel, theater, lake, and carnival rides, including a roller coaster that at one time was the world's largest. A streetcar line brought visitors to the park from nearby Kansas City.

In 1903, Standard Oil of Indiana purchased land at the northern edge of the city. A new oil refinery was opened a year later and quickly spurred growth in the townsite of Sugar Creek. A number of immigrants from Eastern Europe came to work in the plant, and by 1918, the town had grown to more than 800 residents. 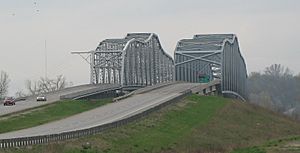 Shortly after World War I, businessmen and residents founded the Sugar Creek Improvement Association. The Association installed streetlights, set city limits and petitioned for incorporation as a city. On November 15, 1920, the City of Sugar Creek was officially born. The new town consisted of 564 acres (2.28 km2) and had a population of around 1,800 residents. The city continued to grow and prosper in its early years. In 1958, an additional 294 acres (1.19 km2) were annexed on the eastern side of the city, bringing new opportunities for development.

The Liberty Bend Bridge, in northeastern Sugar Creek, carries Route 291 across the Missouri River. The northbound bridge was built in 1949 when a new channel for the river was completed, and replaced the 1927 Liberty Bend Bridge which was about two miles to the north and crossed over the former river channel. Construction began in 1996 on the southbound bridge, which opened in 2001, and the northbound bridge was completely rehabilitated. It was part of an upgrade that changed Route 291 into a four-lane divided highway.

In the 2000s, BP America was involved in over 24 multimillion-dollar lawsuits for extreme polluting and causing unusual cancers in many people caused by its predecessors Amoco and Standard Oil at its Sugar Creek refinery which closed in 1982.

There were 1,420 households of which 27.5% had children under the age of 18 living with them, 39.0% were married couples living together, 14.9% had a female householder with no husband present, 6.1% had a male householder with no wife present, and 40.0% were non-families. 31.8% of all households were made up of individuals and 11.2% had someone living alone who was 65 years of age or older. The average household size was 2.36 and the average family size was 2.96.

There were 1,633 households out of which 24.8% had children under the age of 18 living with them, 46.2% were married couples living together, 12.1% had a female householder with no husband present, and 35.8% were non-families. 30.0% of all households were made up of individuals and 10.4% had someone living alone who was 65 years of age or older. The average household size was 2.35 and the average family size was 2.87.

All content from Kiddle encyclopedia articles (including the article images and facts) can be freely used under Attribution-ShareAlike license, unless stated otherwise. Cite this article:
Sugar Creek, Missouri Facts for Kids. Kiddle Encyclopedia.