Platte City is a city in and the county seat of Platte County, Missouri within the United States. It is a northern suburb of Kansas City. The population was 4,691 at the 2010 census. The city is part of the Kansas City metropolitan area. 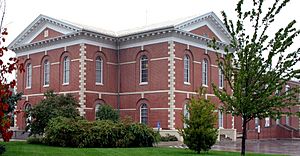 Platte County Courthouse in Platte City was built after the original courthouse was destroyed in the Burning of Platte City during the American Civil War. Blanche Barrow was held at the adjoining jail following a Bonnie & Clyde shootout just south of Platte City at the Red Crown Tourist Court.

Platte City was founded by Zadock "Zed" Martin and was incorporated as a city in September 1843.

The Platte County Fair held annually just outside Platte City began in 1863 and is the oldest continuously operating fair west of the Mississippi River.

On April 3, 1882, Jesse James planned a robbery of the Platte City bank, but it was never carried out due to his assassination by Robert Ford on the morning of the raid.

On July 19, 1933 Bonnie & Clyde were ambushed by, and engaged in, a shootout with local authorities just south of Platte City at the Red Crown Tourist Court.

The Frederick Krause Mansion and Platte County Courthouse are listed on the National Register of Historic Places.

There were 1,975 households, of which 32.5% had children under the age of 18 living with them, 41.7% were married couples living together, 12.9% had a female householder with no husband present, 4.9% had a male householder with no wife present, and 40.6% were non-families. 34.9% of all households were made up of individuals, and 9.3% had someone living alone who was 65 years of age or older. The average household size was 2.29 and the average family size was 2.97.

Platte City is accessible via Interstate 29 at exit 18.

Platte City has a public library, a branch of the Mid-Continent Public Library.

All content from Kiddle encyclopedia articles (including the article images and facts) can be freely used under Attribution-ShareAlike license, unless stated otherwise. Cite this article:
Platte City, Missouri Facts for Kids. Kiddle Encyclopedia.