There were 1,727 households of which 33.8% had children under the age of 18 living with them, 46.0% were married couples living together, 13.0% had a female householder with no husband present, 4.4% had a male householder with no wife present, and 36.5% were non-families. 32.0% of all households were made up of individuals and 15.9% had someone living alone who was 65 years of age or older. The average household size was 2.42 and the average family size was 3.05.

The City of California was established in 1834. The seat of justice of Moniteau County was originally known as Boonesborough. When Moniteau County was organized in 1845, it was decided that Boonsborough would become the county seat. Because the county court was unwilling to pay for land in Boonsborough, a site was selected one-mile (1.6 km) west and this would become the new county seat. In 1846, the Post Office required a new name to be selected for Boonsborough since there was already a Boonsborough in Missouri. The city was renamed California on January 25, 1847 for the territory on the West Coast that was just then drawing attention due to progress of the overland railroad. That same year, a courthouse was erected on the square.

California was incorporated in 1848 and elected its first city officials in 1858, ten years later.

The Weekly California News printed its first edition on September 18, 1858 and has since been Moniteau County's oldest established business still in operation. Today it is known as the California Democrat.

By the end of the Civil War, California's population was around 1,000. The city had 10 dry goods stores, 2 drug stores, a tobacco factory, a large steam flouring mill and carding machine, a high school, a printing office, and a bank.

In 1867, money was appropriated for a new courthouse, which was completed in 1868 and is still in use today.

In addition to the Finke Opera House, Gray-Wood Buildings, and Moniteau County Courthouse listed below, the Old Barnhill Building and Old California City Hall and Fire Station are also listed on the National Register of Historic Places. 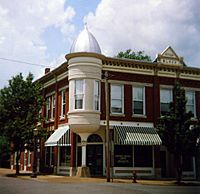 Built in 1898 by Charles A. Eitzen, this mansion has 19 rooms and 9 fireplaces and includes the original slate roof. The carriage house and stable, with a room for the coachman, are still standing on the property, which takes up an entire city block. The home remained in the Eitzen family until 1952. Since then, it has been used as a nursing home, restaurant, and bed and breakfast successively. Through all of those changes, remarkably, the original fireplaces, woodwork, and beautiful main staircase with its ornate woodwork remained intact. Today, the mansion is a private residence.

Located at 312 North High Street in downtown California, the Finke Opera House/theatre was built in 1885. The building was designed by Jerome Bibb “J.B.” Legg, a well-known St. Louis architect. Legg was also responsible for designing many Missouri courthouses, opera houses, theaters, churches, schools and public buildings and remodeled the Missouri State Capitol in 1887. The theater was named to the National Register of Historic Places for its significance in the area of entertainment and recreation in 2004.

The two-story brick building was California’s only opera house and theater and therefore was the main entertainment center for the community. From 1885-1897, it was known as the California Opera House and then the Finke Opera House from 1897-1922. While it was the opera house, the building was home to stage shows, plays, musical and school performances. Blind Boone played the piano at the opera house in 1893. Cole Younger, an associate of Jesse James, lectured at the opera house in 1909. From 1922-1937, it was known as Finke Theater and featured vaudeville and motion pictures. In 1937, it was renovated from its Victorian style to an art deco style and became known as the Ritz Theatre, from 1937-1978. It has been known as the Finke Theater since the theater opened for the 2009-10 season on September 26, 2009.

The opera house/theatre was recently renovated by California Progress, Inc., along with the adjacent Finke Building, to save this historical landmark.

Located at 401-407 North High Street in downtown California, the Gray-Wood Buildings were added to the National Register of Historic Places in 1984 for their architectural significance. Built in the late 1800s, the buildings house several businesses today.

Built in 1867, the Moniteau County Courthouse is one of the oldest courthouses in Missouri. The semicircular front portico and the square mounted abaci on top of the brick columns resemble those of former State Capitol built in 1840. The courthouse square has been on the National Register of Historic Places since 1970. The first floor of the courthouse features several museum displays.

This mansion was built in 1867 by Niles Rice. The Victorian home has 12-foot (3.7 m) ceilings, six-foot hallways, and 36 narrow seven-foot windows. It is currently a private residence.

Located in the historic Ehrhardt Building, this building was constructed in 1864 and was home to the J. G. Ehrhardt Mercantile Company. The building was purchased by California Progress, Inc. in 1995 and restored to preserve a historical landmark in the community. The library moved into the building in August 1998.

Loran Creech, a nationally renowned watercolorist and Best of Missouri Hands juried artist, calls California home. His historic two-story home in California serves as his gallery and guests are welcome. Creech's work has been featured in galleries all across the U.S.

The Finke Theatre hosts regular performances throughout the year.

There is an art studio in downtown California with art classes and the California Parks and Recreation Department offers an art camp in the summer.

City Park is the oldest park in California. It features basketball and tennis courts and a playground.

Railroad Park is located just north of the City Hall along the Union Pacific Railroad. This park is located where the railroad depot was once located. The open-air shelter is a replica of the old depot.

The California Municipal Pool is an indoor olympic-sized swimming pool with an outdoor splash deck.

California boasts a strong recreation program, serving children in the California area year-round. Also located in California are an airport (used for recreational flying), a 10-lane bowling alley, a roller rink, a dance studio, and some gyms. 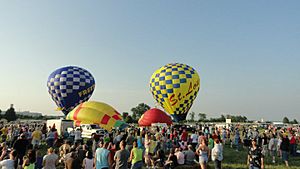 In 2011, the Moniteau County Fair celebrated its 145th anniversary. The Fair began in 1866 and is believed to be the oldest continuous fair west of the Mississippi River. Events at the fair include the tractor pull, demolition derby, Tuff Truck competition, figure 8 race, horse show, battle of the bands, Miss Moniteau County Queen contest, baby show, and rodeo. This annual event is held during the first full week of August at the Moniteau County Fairgrounds. Referenced in Missouri Roadsides: The Traveler's Companion by Bill Earngey.

The Ozark Ham & Turkey festival, held annually on the third Saturday in September, is a one-day festival designed to showcase two of the major industries in both California and Moniteau County. Billed as having "something for everyone", this festival has activities throughout town.

A Cinco de Mayo Festival is held in downtown on the first Saturday of May. It features, food, crafts, entertainment and more. It celebrates California's large Hispanic population.

A Farmer's Market is held every Friday afternoon/evening from April to October near Smith-Burke Park.

Christmas California Style is held the first Friday and Saturday of December. Events include business open houses, a lighted Christmas parade, and more.

All content from Kiddle encyclopedia articles (including the article images and facts) can be freely used under Attribution-ShareAlike license, unless stated otherwise. Cite this article:
California, Missouri Facts for Kids. Kiddle Encyclopedia.