The Missouri State Capitol is the building that houses the Missouri General Assembly and executive branch of the government of the U.S. state of Missouri. Located in Jefferson City at 201 West Capitol Avenue, it is the third capitol in the city after the other two were demolished when they were damaged in fires. The domed building, designed by the New York City architectural firm of Tracy and Swartwout, was completed in 1917.

The Capitol's dome, which rises 238 feet (73 m) above ground level and topped by a bronze statue of Ceres, the Roman goddess of agriculture, rises above the bluffs of the Missouri River and is the first view of Jefferson City for travelers arriving from the north. In addition to the state Senate and House of Representatives, the Capitol also contains offices for the governor, lieutenant governor, secretary of state, state treasurer, state auditor, and some administrative agencies.

It is individually listed on the National Register of Historic Places and a contributing property in the Missouri State Capitol Historic District. 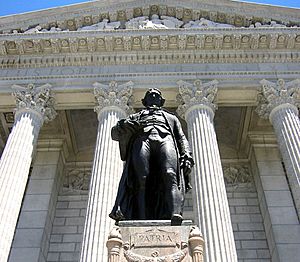 The Missouri State Capitol is notable for its architectural features, including its eight 48-foot (15 m) columns on the south portico and its six 40-foot (12 m) columns on the north side, its 30-foot (9 m)-wide grand stairway; and its bronze front doors, each 13 by 18 feet (4.0 m × 5.5 m)—at the time, the largest cast since the Roman era. Also on the South lawn are The Sciences and The Arts Fountains, each with four representative figures.

Statuary is a prominent feature of the Capitol grounds. Heroic allegorical bronze figures depicting Missouri's two historically great rivers—the Mississippi and the Missouri—by Robert Aitken and a 13-foot (4 m) tall statue of Thomas Jefferson made by James Earle Fraser all dominate the south entrance. A Karl Bitter bronze relief, depicting the signing of the Louisiana Purchase by Livingston, Monroe and Marbois; and the Fountain of the Centaurs, created by A.A. Weinman; are featured on the north grounds.

The north side of the building contains a frieze showing the history of Missouri by Hermon Atkins MacNeil, while the theme is continued on the south side by Alexander Stirling Calder. The figure of Ceres on the top of the dome is by Sherry Fry and the pediment over the main entrance is by Weinman.

The Capitol's first floor features the State Museum. Paintings, pediments, and friezes decorate the Capitol's interior. A prime attraction is a series of murals painted by Thomas Hart Benton in the House Lounge. The grand staircase is flanked by large heroic bronze statues of Meriwether Lewis and William Clark, and the third-floor rotunda is the site of the Hall of Famous Missourians, a group of bronze busts of many prominent Missourians honored for their achievements and contributions to the state.

The structure also features a whispering gallery high within the dome; a small viewing platform is on the dome's roof beneath the statue of Ceres. These areas are not normally open to the public except for special tours and school tours.

The Capitol is Jefferson City's leading tourist attraction. It is a destination for school groups who arrive by busloads, particularly during General Assembly sessions. Students fill the galleries to watch the Senate and House of Representatives in action.

History of the structure 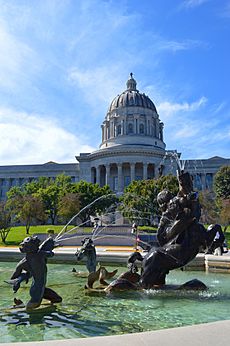 Missouri State Capitol and Fountain of the Centaurs (north side)

The present Capitol, completed in 1917 and occupied the following year, is the third Capitol in Jefferson City and the sixth in Missouri history. The first seat of state government was housed in the Mansion House, located at Third and Vine Streets in St. Louis and the second one was in the Missouri Hotel located at Main and Morgan Streets in St. Charles. St. Charles was designated as the temporary capital of the state in 1821 and remained the seat of government until 1826.

It was decided that the Capitol should be located more in the center of the state and specifically that it should be located on the Missouri River within 40 miles (64 km) of the mouth of the Osage. A group was sent out to survey various locations. The present location on top of the bluffs in Jefferson City was chosen because it afforded the best view of the Missouri River of any place which they had seen within the limits prescribed by the Constitution.

The fourth Capitol (the first in Jefferson City) was made out of brick, two stories tall, measured approximately 40 by 60 feet (12 m × 18 m), and took two years to complete. It was built for approximately $18,500 (equivalent to $347,256 in 2018). It was called the "Governor's House and State Capitol." This building burned in 1837. The site is now occupied by the present-day Missouri Governor's Mansion. It was designed by Stephen Hills and modeled on the first Pennsylvania State Capitol in Harrisburg, Pennsylvania. Hills also designed Academic Hall of the University of Missouri; the six Ionic columns that survived the 1892 fire that destroyed the building are now the campus's landmark columns at the David R. Francis Quadrangle.

The fifth Capitol (which was at the current site) was completed in 1840 for approximately $350,000 (equivalent to $7,445,667 in 2018), with some claiming that there were bribes and kickbacks. This building also burned on February 5, 1911 when it was struck by lightning. This building was approximately 50,000 square feet (4,600 m2) and by 1911, was far too small to meet the needs of the legislators. Missouri Senator William Warner said, "I have no tears to shed over the fact that the building has been destroyed as it was totally inadequate and not in keeping with the requirements of our great state."

The original budget called for a building to be constructed for $3 million (equivalent to $68.38 million in 2018), with an additional $500,000 (equivalent to $11,396,429 in 2018) allocated for site and furnishings. This was approved in general election by the public by a three-to-one margin, however, the state miscalculated on revenue projections, and ended up collecting $4,215,000 (equivalent to $96,071,893 in 2018). All of this money was eventually used for the entire project, which is one of the reasons why the sculptures and artwork are of such high caliber. Edwin William Stephens of Columbia served as chair of the Capitol Decoration Committee along with University of Missouri art professor John Pickard.

It was also decided that the architect would be selected from a design competition; names were redacted from the submissions so that there would be no local favoritism. A total of 69 architecture firms submitted for the competition, from which a short list of 11 was chosen. Tracy & Swarthout from New York was ultimately selected. 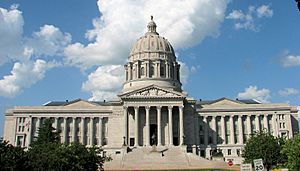 The building is symmetrical in plan, giving equal symbolic weight to both the House and Senate (though the interiors of the two chambers differ greatly). The style makes many historical references to the Capitol in Washington, D.C., as well as to Greek and Roman temples; however, the typical column capital is a unique variation on the Classic Corinthian Capital, replacing the acanthus leaves with local flora.

In November 2006, the 9,000 lb (4,100 kg) dome chandelier, which had been lowered almost to the floor for maintenance, fell the remaining five feet. The chandelier was damaged by the impact and by the ornamental chains that fell on it. It was sent to St. Louis for repairs. Nearly a full year later, the chandelier was returned and raised in the Capitol. The upper lights were also restored, after they had been turned off for four decades due to light damage to the mural above. Created in 1918 by the Guth Lighting Company of St. Louis for a cost of $5,000 (equivalent to $70,754 in 2018), the chandelier cost $500,000 (equivalent to $528,749 in 2018) to be restored.

All content from Kiddle encyclopedia articles (including the article images and facts) can be freely used under Attribution-ShareAlike license, unless stated otherwise. Cite this article:
Missouri State Capitol Facts for Kids. Kiddle Encyclopedia.