Kids Encyclopedia Facts
This page is about the small city in northwestern Missouri. For the larger Missouri city that was historically nicknamed "Mound City", see St. Louis.

Mound City is a city in Holt County, Missouri, United States, centered near the interchange of Interstate 29 and Missouri Route 118. The population was 1,159 at the 2010 census, slightly down from the 1,193 people counted during the previous census.

Mound City is located in what was in the early 19th century considered to be unorganized Missouri Territory. In 1836, leaders of the Iowa, Sauk and Meskwaki peoples sold land that included what would become Mound City, as part of the 3,149 square miles (2,015,000 acres; 8,160 km2) of the Platte Purchase. 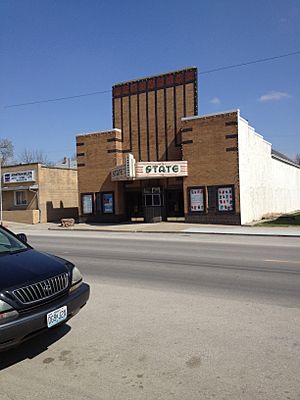 Mound City benefits economically from the Squaw Creek National Wildlife Refuge, which is about 5 miles (8.0 km) from the city. Since spring snow geese migration numbers first topped one million in March 2008, Mound City and the surrounding area have benefited from the nearly 300,000 visitors they have attracted, including thousands of hunters who hunt in the stubble of corn fields that surround the refuge.

The refuges is estimated to add about $2.6 million to the economies of Holt and Buchanan counties. Hunting is prohibited on the 7,500-acre refuge, but not in the corn fields where the geese feed, which surround the refuge.

There were 514 households, of which 25.9% had children under the age of 18 living with them, 49.4% were married couples living together, 9.5% had a female householder with no husband present, 2.7% had a male householder with no wife present, and 38.3% were non-families. 34.8% of all households were made up of individuals, and 20% had someone living alone who was 65 years of age or older. The average household size was 2.16 and the average family size was 2.76.

All content from Kiddle encyclopedia articles (including the article images and facts) can be freely used under Attribution-ShareAlike license, unless stated otherwise. Cite this article:
Mound City, Missouri Facts for Kids. Kiddle Encyclopedia.