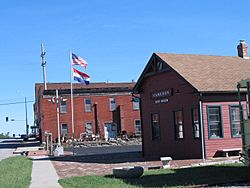 Historic Cameron depot - the Hannibal and St. Joseph Railroad in the "Cameron Cutoff" built the Hannibal Bridge across the Missouri River resulting in Kansas City, Missouri becoming the biggest city in the region.

Cameron is a city in Clinton and DeKalb counties in the U.S. state of Missouri. The population was 9,933 at the 2010 census.

In 1854 Samuel McCorkle platted the town of Somerville. When the Hannibal and St. Joseph Railroad (a line whose founders included the father of Mark Twain and which was to deliver the first mail of the Pony Express) proposed coming through the area, the line said the area around Somerville was too steep for the rail so he platted a new community 1.5 miles to the west in what is now "Olde Towne" Cameron. The town platted in 1855 was named for the maiden name of his wife Malinda Cameron. McCorkle Park is still Cameron's centerpiece park.

During the 1860s as fierce competition raged for the starting point of the First Transcontinental Railroad there was competition to get the Hannibal & St. Joseph (which at the time was the farthest west railroad connected to the main rail network) to cross the Missouri River. Omaha, Nebraska was to win the fight when the Union Pacific started the railroad west from there. However, there was no bridge connecting it to the rest of the network.

Kansas City, Missouri was able to convince the railroad to bypass its rivals in St. Joseph, Leavenworth, Kansas, Atchison, Kansas and Parkville, Missouri to create the "Cameron Branch" of the railroad. The construction of the Hannibal Bridge in Kansas City (which was to beat Omaha in any bids to cross the Missouri) was to propel that city into being the dominant city in the region.

Cameron was a college town from 1883 until 1930. Founded as the Cameron Institute it became Missouri Wesleyan College operated by the Methodist Church until 1930. A building on the campus would become Cameron High School (the Dragons) until being torn down in the 1960s when a new high school was built on a site a few blocks south; the campus grounds are now used as parking for the nearby football field.

Cameron gained prominence in the 1980s and 1990s after Cameron area resident Bob F. Griffin served more than 15 years as Speaker of the Missouri House of Representatives—the longest of any representative. Among the pork barrel legislation he was to bring to the town is the Missouri Veterans Home and the Western Missouri Correctional Center which is the city's biggest employer with 700 employees. A street in the town is named "Bob Griffin Road," though the road remains (as of June 2016) unpaved for most of its length. Griffin eventually served four years for corruption.

Cameron's character has evolved with the intersection of limited access highways. It has expanded to the north towards and past U.S. Route 36 (which in 2007 was proposed to be part of Interstate 72 in Missouri. It has also expanded to the east towards Interstate 35.

More than two thirds of the community is in Clinton County south of NE Platte/8th Street/County Road 56. This area includes the original olde town center, Cameron High School and Veterans Home. The area north of the street in DeKalb includes the Crossroads Correctional Center and Western Missouri Correctional Center, and the shopping centers next to U.S. 36. In addition portions of the community stretch east to the Caldwell County, Missouri line. The north-south-east division creates an unusual street grid naming system where some streets in the northern part of Cameron in DeKalb follow that county's naming structure of Southeast Rogers Road, Southeast Summit Road, Southeast Pence Road, etc. while roads in the south of Cameron in northern Clinton County have road names of Northeast 358th Street, Northeast 348th Street, etc. These latter street names and directions represent a continuation of the street system for Kansas City. With Caldwell County on the east side of Cameron, that means that street name extensions in Caldwell County on the far east side have a prefix of Northwest such as Northwest Old Highway 36. In one instance just outside the city limits Southeast Oregon Road in Dekalb County turns into Northwest Oregon Road in Caldwell County when heading east out of Cameron.

Cameron experiences a humid continental climate, with cold and snowy winters and hot and humid summers. Extreme weather, such as thunderstorms and tornadoes, can and have occurred in Cameron. Snow falls during the winter months, while late spring and early summer are the wettest time.

There were 2,605 households of which 33.8% had children under the age of 18 living with them, 42.6% were married couples living together, 12.4% had a female householder with no husband present, 5.0% had a male householder with no wife present, and 40.0% were non-families. 35.0% of all households were made up of individuals and 16.1% had someone living alone who was 65 years of age or older. The average household size was 2.36 and the average family size was 3.04.

There were 2,263 households out of which 33.5% had children under the age of 18 living with them, 48.3% were married couples living together, 11.6% had a female householder with no husband present, and 36.6% were non-families. 32.0% of all households were made up of individuals and 16.2% had someone living alone who was 65 years of age or older. The average household size was 2.39 and the average family size was 3.03.

All content from Kiddle encyclopedia articles (including the article images and facts) can be freely used under Attribution-ShareAlike license, unless stated otherwise. Cite this article:
Cameron, Missouri Facts for Kids. Kiddle Encyclopedia.