Nodaway County is a county located in the northwest part of Missouri. As of the 2010 census, the population was 23,370. Its county seat is Maryville. The county was organized February 14, 1845, and is named for the Nodaway River. It is the largest in area of the counties added to Missouri in the 1836 Platte Purchase, and the fourth-largest county in Missouri. 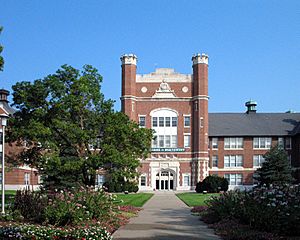 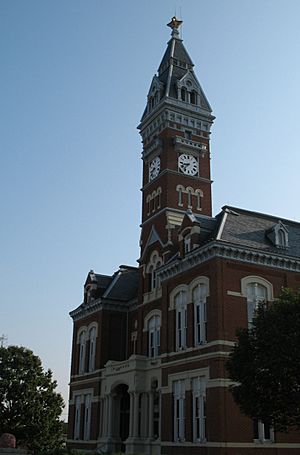 Nodaway County Courthouse is on the National Register of Historic Places

The county has a rich agricultural history. It is the home of trainers Ben Jones and Jimmy Jones, whose horses won six Kentucky Derby races and two Triple Crowns.

The grounds of Northwest Missouri State University contain the official Missouri State Arboretum and were a re-creation of the landscape of the 1904 St. Louis World's Fair. ESPN has carried the university's participation in five national championship football games, three of which they won.

U.S. Supreme Court Justice Clarence Thomas studied to become a priest at Conception Seminary College, before giving it up for law. The Benedictine Sisters of Perpetual Adoration convent in neighboring Clyde has 550 relics of saints, the largest collection in the nation.

Located in Tornado Alley, many tornadoes have struck the county, including an F4 tornado on April 10, 1979, which obliterated the town of Braddyville, Iowa across the county line. Tornadoes have damaged two of the county's largest buildings, the Administration Building on the campus of Northwest Missouri State University and Conception Abbey. The 1881 Hopkins tornado is one of the first recorded F5 tornadoes.

Several sensational murders have drawn attention to the county, including a profile by CBS's 60 Minutes, as well as in movies.

Early life in the county was chronicled by writer Homer Croy, a Nodaway County native, in many books, articles, films and Broadway shows in the 1920s and 1930s.

The origin of the name "Nodaway" has been attributed to a Pottawatomie name for "placid," a Dakota Sioux name for "crossed without canoe" and various tribes names for "snake."

Nodaway County is served by Northwest Missouri Regional Airport in Maryville, which is a general aviation airport with no commercial service.

All content from Kiddle encyclopedia articles (including the article images and facts) can be freely used under Attribution-ShareAlike license, unless stated otherwise. Cite this article:
Nodaway County, Missouri Facts for Kids. Kiddle Encyclopedia.