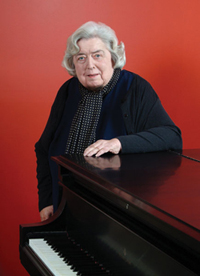 Caldwell was born in Maryville, Missouri, and grew up in Fayetteville, Arkansas. She was a child prodigy and gave public performances on the violin by the time she was ten years old. She graduated from Fayetteville High School at the age of 14.

Caldwell graduated from Hendrix College in 1944 and attended the University of Arkansas as well as the New England Conservatory of Music. She won a scholarship as a viola player at the Berkshire Music Center in 1946. In 1947, she staged Vaughan Williams's Riders to the Sea. For 11 years she served as the chief assistant to Boris Goldovsky.

Caldwell moved to Boston, Massachusetts, in 1952 and became head of the Boston University opera workshop. In 1957 she started the Boston Opera Group with $5,000. This became the Opera Company of Boston, where she staged a wide range of operas and established a reputation for producing difficult works under pressure. She was also known for putting together interesting variations on standard operas.

All content from Kiddle encyclopedia articles (including the article images and facts) can be freely used under Attribution-ShareAlike license, unless stated otherwise. Cite this article:
Sarah Caldwell Facts for Kids. Kiddle Encyclopedia.