Webb City is a city in Jasper County, Missouri, United States. The population was 13,031 at the 2020 census. It is part of the Joplin, Missouri Metropolitan Statistical Area. Webb City also has a police department, a fire department, and animal control services. 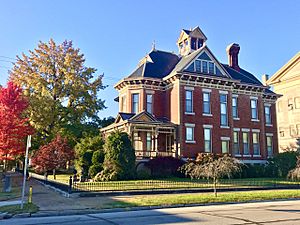 The Elijah Thomas Webb Residence built circa 1891, is a Late Victorian Queen Anne home that is listed on the National Register of Historic Places located in Webb City Mo. on Old Route 66. The home was constructed by the son of founding father John C. Webb.

Webb City, (Webbville), was platted by John C. Webb in September, 1875 and incorporated in December, 1876, with a population of 700. The city was located on a portion of Webb's 200 acre farm, which he entered in February, 1857. There, in 1873, Webb discovered lead while plowing. With the assistance of W.A. Daugherty, he sank the first pump-shaft in 1874. Webb then leased his land to Daugherty and G.P. Ashcraft. In 1876 the Center Creek Mining Company leased the land and began operations. Some 20 years later 700 mines were located within the limits of Webb City and adjacent Carterville and the district ranked first in the production of zinc ore (black jack).

Webb aided the city in its material development. He gave land for a school and the first Methodist Episcopal Church, South. He built the Webb City Bank and the first hotel.

The St. Louis and San Francisco Railroad was built to Webb City in 1879, the Missouri Pacific in 1881. The population increased from 1,588 in 1880 to 9,201 in 1900. After the success of the first Webb City sheet ground mine ("Yellow Dog") in the 1890s, business boomed. The 100 room Newland Hotel was built and co-educational Webb City College was established. The Webb City Mining District was prominently represented at the Chicago Columbia Exposition in 1893, and at the 1898 Omaha International Exhibit. Webb City received for its mineral display the only silver medal awarded. A.H. Rogers built a mule street car line from Webb City to Carterville, 1889, predecessor of the SouthWest Missouri Electric Railway, established 1893, and expanded in the 1900s to a vast inter-urban system with power plant, car barns and an employee club house at Webb City.

During World War I zinc and lead concentrates produced in the Webb City ~ Carterville ~ Prosperity District were valued at more than $18 million. Webb City's population increased to some 15,000.

After the decline of mining in the postwar period, Webb City turned to diversified industrial and agricultural production. In the 1930s and during World War II, explosives were manufactured by powder plants located near Webb City.

The Downtown Webb City Historic District and Middle West Hotel are listed on the National Register of Historic Places.

During the late 19th and early 20th centuries Webb City was part of the "Tri-State Mining District" at the time the world's largest and most productive lead and zinc mining field. The area remains surrounded by chat piles that are used primarily in road-building.[1]

All content from Kiddle encyclopedia articles (including the article images and facts) can be freely used under Attribution-ShareAlike license, unless stated otherwise. Cite this article:
Webb City, Missouri Facts for Kids. Kiddle Encyclopedia.