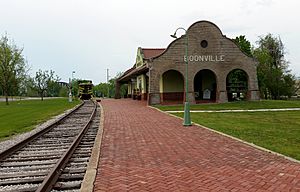 Boonville is a city and the county seat of Cooper County, Missouri, United States. The population was 8,319 at the 2010 census. The city was the site of a skirmish early in the Civil War, on July 17, 1861. Union forces defeated a small and poorly equipped force of the Missouri State Guard in the first Battle of Boonville. It is part of the Columbia, Missouri metropolitan area.

The community derives its name from Nathan and Daniel Morgan Boone, who were the sons of Daniel Boone and established their salt business near the community in the early 1800s by delivering the salt from salt licks to St. Louis. The area has been called "Boone's Lick" and the route from the lick to St. Charles/St. Louis, Missouri is called the Boone's Lick Trail. The eastern terminus near Boonville at Franklin, Missouri is considered the original start of the Santa Fe Trail.

The first pioneers were Hannah and Stephen Cole, who settled in 1810. During skirmishes with Native Americans in the War of 1812 they moved to a fort on the north side of the Missouri River (called on markers as "Hannah Cole Fort"). That fort subsequently became the first county seat of Howard County, Missouri.

After the war, the town was formally laid out in 1817 by Asa Morgan and Charles Lucas. Boonville was named the county seat in 1818.

The community's position on the Santa Fe Trail and Missouri River led to many historic residents of the era living there during the westward expansion including George Graham Vest, David Barton, William Ash and George Caleb Bingham.

The Cooper County Jail was built in 1848 and remained in place until 1979 with a claim that it was the longest-serving jail in Missouri history.

In 1855, Thespian Hall opened and now claims to be the oldest continuously running theatre west of the Allegheny Mountains.

More than 400 buildings (most in 14 separate historical districts) are listed on National Register of Historic Places listings in Cooper County, Missouri.

During the American Civil War, the community was fought over and held by both sides including in the Battle of Boonville on June 17, 1861, a month before the First Battle of Bull Run which gave the Union control of the Missouri River; and 2nd Battle of Boonville on September 13, 1861; and its capture by Sterling Price in 1864 in Price's Raid.

The city was a strategic target because of its location on the Missouri Pacific Railroad. The track was subsequently taken over by the Missouri–Kansas–Texas Railroad. In the 1980s, the track section that traversed the town was converted to parkland, as part of Katy Trail State Park. Today, the "Katy Trail" is the longest rails to trails system in the United States.

In 2008, Anheuser-Busch InBev opened the Warm Springs Ranch west of Boonville as the primary breeding farm for the Budweiser Clydesdales.

Boonville is near the middle of the Katy Trail, a 225-mile state park enjoyed by cyclists and hikers. Katy Trail Bridge in Boonville, which crosses the Missouri near the Isle of Capri Casino and Historic Selwyn Shoe Factory (which has been refurnished as apartments), has been subject of controversy. The railroad would like the bridge to be taken down so the metal can be melted and reused. However, Friends of Historic Boonville and others across the state oppose the idea.

Annually, Boonville celebrates Boonville Heritage Days. This is a summer weekend event that focuses on heritage. Activities include a parade, craft booths, a carnival and much fun for people of all ages. On the last evening there is a fireworks show.

The annual Halloween parade features the award-winning Boonville Silver Pirate Band dressed up in a variety of costumes.

Twillman Field in Harley Park is also a source of some pride, as it hosts several baseball tournaments every year, including state and regional championships, with ages ranging from 13 to 18. At one time in the late 1980s through 1990s, it was considered by some to be the 3rd best baseball field in the state, trailing only the Major League parks in St. Louis and Kansas City.

There is also a parochial PreK-8th school Sts. Peter and Paul, which was established in the 1850s and has the Warriors as their mascot.

Boonville has a public library, a branch of the Boonslick Regional Library.

All content from Kiddle encyclopedia articles (including the article images and facts) can be freely used under Attribution-ShareAlike license, unless stated otherwise. Cite this article:
Boonville, Missouri Facts for Kids. Kiddle Encyclopedia.