Edina is a city in Knox County, Missouri, United States, between the North and South Forks of the South Fabius River. As of the 2020 census, its population was 1,012. It is the county seat of Knox County.

Panoramic sketch of the Edina, Missouri courthouse square and some surrounding businesses, circa 1876. View is looking north. 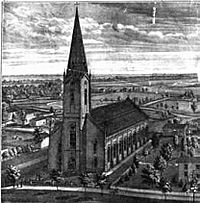 A sketch of St. Joseph's Catholic Church, Edina, Missouri. Circa 1876. The church is still in existence today.

Edina was platted in 1839. The community was named after the Scottish city of Edinburgh, as referred to by Scots poets. A post office called Edina has been in operation since 1850.

The Edina Double Square Historic District is listed on the National Register of Historic Places.

There were 535 households, of which 25.0% had children under the age of 18 living with them, 43.9% were married couples living together, 12.1% had a female householder with no husband present, 2.2% had a male householder with no wife present, and 41.7% were non-families. 38.3% of all households were made up of individuals, and 20.4% had someone living alone who was 65 years of age or older. The average household size was 2.14 and the average family size was 2.84.

According weather data tallied between July 1, 1985 and June 30, 2015 for every location in the National Oceanic and Atmospheric Administration's official climate database, Edina, Missouri, is the snowiest place in the state of Missouri with an average of 22 inches of snow per year.

The town has a lending library, the Knox County Branch Library.

All content from Kiddle encyclopedia articles (including the article images and facts) can be freely used under Attribution-ShareAlike license, unless stated otherwise. Cite this article:
Edina, Missouri Facts for Kids. Kiddle Encyclopedia.