Downing is a city in Schuyler County, Missouri, United States. The population was 335 at the 2010 census. It is part of the Kirksville Micropolitan Statistical Area. 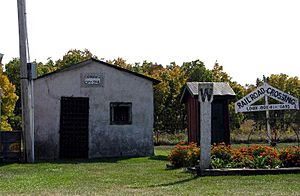 Downing Jail. No longer in use.

Although not being laid out as a town until 1872, the Downing area was one of the earliest settled areas of Schuyler county, with Henry Downing building a home and claiming land a few miles south of the area around 1837. It was also near present-day Downing that the first school in the county was established. In the spring of 1841 a crude log cabin was built for use as a school not far from Henry Downings home and Miss Esther Hathaway employed as teacher. One of the early names for the unincorporated settlement was Cherry Grove.

During the American Civil War, on July 1, 1862, a small skirmish took place near Cherry Grove. Cavalry from the second battalion, Eleventh Missouri State Militia, a pro-Union force, engaged a small number of Confederate troops under Colonel Joseph C. Porter. Porter's outnumbered forces were defeated, with four killed and several men and horses captured. The Union forces had one man badly injured, who would die a few days later. At the time of the skirmish Porter was heavily involved in recruiting men in northeast Missouri for the Confederate cause. The following month he would suffer a larger defeat some twenty-five miles southwest at the Battle of Kirksville.

In September, 1872 the Missouri Town Company created the original town plat, naming it for the President of the company, H. H. Downing. Land for the town, the railroad right of way, and depot were donated by James Prime, and the Missouri, Iowa, and Nebraska Railway constructed the depot in April, 1872. By the late 1880s the Downing business district included four general stores, two drug stores, two grocers, two hardware stores, a restaurant, blacksmith, and two hotels. Manufacturing included two handle factories, a wagon maker, a hoop factory, a harness and saddle maker, and two combination saw/grist mills. One doesn't normally think of northern Missouri as being a tobacco-growing region, however Downing had two tobacco-buying warehouses in the late 1800s with both reporting extensive business. At its peak in 1902, over 155,000 pounds of tobacco were dealt through the Downing warehouses. The towns location on the Keokuk & Western railroad provided opportunity for the convenient shipment of goods, crops, and livestock from the Downing area.

The Downing Railroad Depot was listed on the National Register of Historic Places in 1983 and now serves as a museum. The depot was moved approximately 1/4 mile from its original trackside location and now serves as the centerpiece of a city park with other nearby buildings, including the former Downing jail.

There were 160 households of which 25.0% had children under the age of 18 living with them, 43.1% were married couples living together, 8.8% had a female householder with no husband present, 4.4% had a male householder with no wife present, and 43.8% were non-families. 40.0% of all households were made up of individuals and 20.6% had someone living alone who was 65 years of age or older. The average household size was 2.09 and the average family size was 2.79.

There were 176 households out of which 26.7% had children under the age of 18 living with them, 48.3% were married couples living together, 6.3% had a female householder with no husband present, and 43.2% were non-families. 39.2% of all households were made up of individuals and 21.0% had someone living alone who was 65 years of age or older. The average household size was 2.25 and the average family size was 3.03.

All content from Kiddle encyclopedia articles (including the article images and facts) can be freely used under Attribution-ShareAlike license, unless stated otherwise. Cite this article:
Downing, Missouri Facts for Kids. Kiddle Encyclopedia.