Kids Encyclopedia Facts
"Steelville" redirects here. It is not to be confused with Steeltown, Steelton, Steel City, or Steeleville.

Steelville is a city in Crawford County, Missouri, United States. The population was 1,642 at the 2010 census. It is the county seat of Crawford County. Steelville is the hometown of Congressman Albert Reeves and Missouri State Representative Jason Chipman. The town was named after the landowner James Steel.

Prior to the 1800s the first people to live in the Steelville area were groups likely tied to the Osage. These peoples were driven west into what is today Oklahoma. In the 1840s the Trail of Tears, a government sponsored forced-march of the largest groups of the southeastern United States, passed through Steelville, with people primarily from the Choctaw and Cherokee tribes. They came mostly from Georgia, Alabama, Kentucky, and Tennessee and were forced to relocate to Oklahoma and the West. It is believed that they stopped in Steelville around the spring to rest, bury their dead, and get supplies.

The first settlers in Steelville were William Britton, who built a small grist mill along the Yadkin Creek, and James Steel, who operated a trading post and was appointed by the government as Commissioner to lay out the city in 1835–the year in which Steelville was founded. Britton remained in the area. Steel, according to census, moved northward to continue his interest in mining.

James Steel purchased 40 acres of land from the government which he later sold to the “County Court” on December 16, 1835 for $50. By this time a little settlement had sprung up. Crawford County Court named the town Steelville as the County Seat. The deed was recorded on December 18, 1835, the town was platted, and the first deeds to lots were sold for $12 each.

The town was incorporated as a city of the fourth class in 1885. At this time, there were 500 inhabitants. The Lebanon Lodge, Masonic, was chartered on October 14, 1846. The first tailor, Mr. Vanburg, came in town in 1844. The first hotel was owned by James Davis. In 1847, A. W. Johnson opened a blacksmith shop. Andrew Jackson opened the first Post Office. Doctor Dunlap was the first doctor, and in 1838, J. H. Johnson opened the first saddle and harness shop.

The Steelville Normal Business Institute was originally at Vichy, Missouri. It was moved to Steelville with the help of John T. Woodruff of Springfield and Professor Hayes and opened during the latter part of 1890.

The first Newspaper of Steelville, Steelville Crawford Missouri, was established on May 4, 1874, by Thomas Roberts. The paper was printed in a log cabin the first time and was a Republican paper.

The Steelville Bank began operations in October, 1884, under the direction of President G. W. Matlock. This was constructed of brick and was very strong by the standards of that time. Later, the bank was named Crawford County Farmers Bank. In 1925, bank robbers made an attempt to rob the bank. Most of the robbers were killed. Robbers included Basil Doman, age 21, from Mitchell, Illinois. McCellan was wounded and died after being examined. Albert Walters, age 20, from Granite City, Illinois, was the driver of the getaway car and was shot. The youngest, Leslie Reiter, age 16, from Madison, Illinois, was sent to jail. One robber was dead, two were wounded, one was taken prisoner, and a fifth got away. He was never caught or identified. The sheriff at the time was Mr. Enke. There was only one citizen wounded – A. D. Schwieder – who was walking out of the adjoining store and was shot in the leg after a shoot out with one of the robbers, whom he killed.

The Big Bend Rural School and Snelson-Brinker House are listed on the National Register of Historic Places. 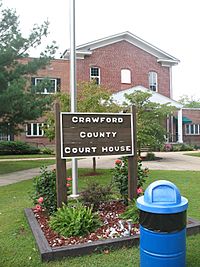 There were 638 households, of which 32.8% had children under the age of 18 living with them, 34.0% were married couples living together, 13.6% had a female householder with no husband present, 6.4% had a male householder with no wife present, and 45.9% were non-families. 37.6% of all households were made up of individuals, and 19.1% had someone living alone who was 65 years of age or older. The average household size was 2.35 and the average family size was 3.12.

Steelville is the self-proclaimed "Floating Capital of Missouri". Three rivers navigable by small watercraft are nearby. They are the Meramec, the Huzzah, and the Courtois (pronounced "Cotaway" by the locals). Many businesses in the area of Steelville offer rentals of canoes, rafts, and inner-tubes for float trips along with camping. This brings "tourists" and "floaters" from as far as Tennessee, Arkansas, etc.

Steelville has a public library, a branch of the Crawford County Library District.

All content from Kiddle encyclopedia articles (including the article images and facts) can be freely used under Attribution-ShareAlike license, unless stated otherwise. Cite this article:
Steelville, Missouri Facts for Kids. Kiddle Encyclopedia.