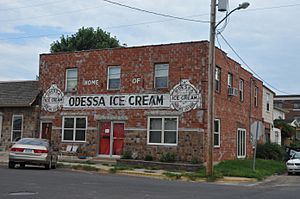 The Odessa Ice Cream Company Building was added to the registry of historic places.

Odessa is the largest city in Lafayette County, Missouri, and part of the Kansas City metropolitan area within the Midwestern United States. The population was 5,593 at the 2020 census. Located along Interstate 70 Odessa's historic downtown is home to a range of boutique shops and restaurants. The city is host to the annual Puddle Jumper Days town fair, the Odessa Rodeo, a Christmas lighting ceremony and various other community events held throughout the year.

Odessa was platted in 1878, and named after Odessa, in Ukraine. A post office called Odessa has been in operation since 1879.

The Odessa Ice Cream Company Building was listed on the National Register of Historic Places in 1996.

I-70 Motorsports Park is a motorsports venue that opened in 1969 with a half-mile paved oval. It was shut down in 2008, then reopened in 2021 with a 3/8 dirt oval and a quarter-mile dragstrip.

Odessa has a public library, a branch of the Trails Regional Library.

All content from Kiddle encyclopedia articles (including the article images and facts) can be freely used under Attribution-ShareAlike license, unless stated otherwise. Cite this article:
Odessa, Missouri Facts for Kids. Kiddle Encyclopedia.