Salem is the county seat of Dent County, Missouri, United States. The population was 4,950 at the 2010 census, which allows Salem to become a Class 3 city in Missouri; however, the city has chosen to remain a Class 4 city under Missouri Revised Statutes. Salem is located a few miles north of the Ozark Scenic Riverways and close to Montauk State Park, which contains the headwaters of the Current River.

The name Salem is derived from the Hebrew word Shalom, meaning "peace".

Dent County was first explored by Dustin Counts and settled between 1818 and 1829. In 1851 the Missouri Assembly created Dent County from Crawford and Shannon counties. It was named for early settler Lewis Dent, who served as the first representative. A log courthouse, built about 1851 or 1852, was Dent County's first and was located on the Wingfield farm northeast of Salem. W. P. Williams became the first mayor of Salem in 1860, just after the Missouri State Legislature passed laws regarding the administration of village government. During the American Civil War, Salem was sometimes manned by units of the 5th Missouri State Militia. Village governments were suspended during the Civil War. In 1881, Salem was incorporated as a town.

The town boasts a number of museums including the Ozark Natural & Cultural Resource Center, the Bonebrake Center of Nature and History, and a historic Downtown Walking Tour.

A 2012 dog bite case that resulted in legal action generated significant media coverage for Salem. David Backes of the St. Louis Blues and his wife got involved by securing a home for the dog in a no-kill animal shelter, though the offer was not needed after the matter was resolved. The dog's owners applied for civil relief before associate circuit judge Scott Bernstein, which was granted, and the dog was returned to them sixteen months after being seized by town officials. The result of the case was that political leadership in the 4th Class city arrangement was adjusted and at the next local election, the mayor of fourteen years was replaced by the veterinarian who boarded the yellow Labrador retriever.

According to the United States Census Bureau, the city has a total area of 3.18 square miles (8.24 km2), all of it land.

Salem High School is the only high school located within the city. Salem is also home to an extension of Southwest Baptist University.

Salem has a lending library, the Salem Public Library. 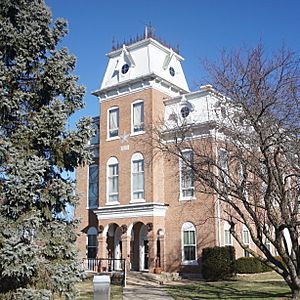 The Dent County Courthouse has been placed on the National Register of Historic Places.

All content from Kiddle encyclopedia articles (including the article images and facts) can be freely used under Attribution-ShareAlike license, unless stated otherwise. Cite this article:
Salem, Missouri Facts for Kids. Kiddle Encyclopedia.