Webster Groves is an inner-ring suburb of St. Louis in St. Louis County, Missouri, United States. The population was 22,995 at the 2010 census.

The city is home to the main campus of Webster University.

Webster Groves is adjacent on the east by Shrewsbury, on the north by Maplewood, Brentwood and Rock Hill, on the west by Glendale, Oakland, and Crestwood, and on the south by Affton and Marlborough.

Webster Groves is approximately 2 miles (3 km) west of the St. Louis city limits, and 10 miles (16 km) southwest of downtown St. Louis, in an area known to fur trappers and Missouri, Osage and Dakota Indians, until 1802, as the "Dry Ridge".

As part of this program, in 1802, Grégoire Sarpy was granted 6,002 acres (2,429 ha) by Charles de Hault Delassus, the last Spanish lieutenant governor of the Illinois Country. The land grant covered the major area now known as Webster Groves.

Webster Groves' location on the Pacific Railroad line led to its development as a suburb. In the late 19th century, overcrowding, congestion, and unhealthy conditions in St. Louis prompted urban residents to leave the city for quieter, safer surroundings. In 1892 the developers of Webster Park, an early housing subdivision, promoted the new community as the "Queen of the Suburbs", offering residents superb housing options in a country-like atmosphere, as well as a swift commute to downtown St. Louis jobs. The first public school in the community was Douglass Elementary School, founded as a separate but equal school for African-American children in the post-Civil War black community in North Webster. In the 1920s, the school grew into Douglass High School, the only high school in St. Louis County for black students. The school operated until 1956, when the U.S. Supreme Court required desegregation.

As a suburban municipality, Webster Groves has its origins as five separate communities along adjacent railroad lines. Webster, Old Orchard, Webster Park, Tuxedo Park, and Selma merged in 1896 to implement public services and develop a unified city government. Since then, Webster Groves' tree-lined streets and abundance of single family homes have continued to attract people to the area as a "great place to live, work and play", not solely for the wealthy commuter suburb that early developers envisioned but for families that cut across all socioeconomic lines. The geographic and economic diversity of Webster Groves is evident in its variety of neighborhoods.

In the 1960s, Webster Groves was featured in 16 In Webster Groves, a televised documentary that writer Jonathan Franzen, a native of Webster Groves, described in his memoir The Discomfort Zone as an "early experiment in hour-long prime-time sociology". According to Franzen, it depicted Webster Groves High School, which he attended only a few years after the documentary's broadcast, as being "ruled by a tiny elite of 'soshies' who made life gray and marginal for the great majority of students who weren’t 'football captains,' 'cheerleaders' or 'dance queens'"; the school was depicted as having a "student body obsessed with grades, cars and money." Franzen thought "the Webster Groves depicted in it bears minimal resemblance to the friendly, unpretentious town I knew when I was growing up."

Webster Groves was the setting for the 1974-5 NBC television series Lucas Tanner.

The Webster Groves High School Statesmen maintain one of the oldest high school football rivalries west of the Mississippi River with the Pioneers of Kirkwood High School. The two teams typically play each other in the Missouri Turkey Day Game each Thanksgiving, if their playoff schedules permit it; they also have faced each other in the state playoff tournaments several times in recent years.

There were 9,156 households, of which 32.6% had children under the age of 18 living with them, 54.3% were married couples living together, 8.7% had a female householder with no husband present, 2.8% had a male householder with no wife present, and 34.2% were non-families. 28.9% of all households were made up of individuals, and 13.8% had someone living alone who was 65 years of age or older. The average household size was 2.43 and the average family size was 3.04. 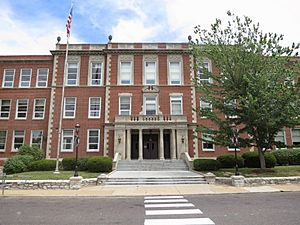 Webster University is in the city.

Notable people who have lived in Webster Groves include:

(Dates in parentheses indicate lifespan, not years of residence.)

All content from Kiddle encyclopedia articles (including the article images and facts) can be freely used under Attribution-ShareAlike license, unless stated otherwise. Cite this article:
Webster Groves, Missouri Facts for Kids. Kiddle Encyclopedia.