Rock Hill is a suburban town in St. Louis County, Missouri, United States. The population was 4,635 at the 2010 census. It is home to the Fairfax House on the National Register of Historic Places.

There were 2,064 households, of which 26.6% had children under the age of 18 living with them, 42.3% were married couples living together, 11.8% had a female householder with no husband present, 3.9% had a male householder with no wife present, and 42.0% were non-families. 33.8% of all households were made up of individuals, and 9% had someone living alone who was 65 years of age or older. The average household size was 2.25 and the average family size was 2.93. 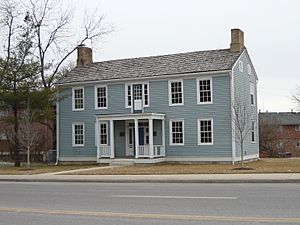 The Fairfax House, on the National Register of Historic Places, at its fourth location in Rock Hill.

There are seven city parks in Rock Hill:

Since 1948 Rock Hill has been part of the Webster Groves School District. Three public schools are within the city's borders:

Rock Hill School District comprised Rock Hill, parts of Ladue, Warson Woods, Kirkwood, Brentwood and Webster Groves; and was one of the first districts formed in St. Louis County. Rock Hill #I on Manchester and Rock Hill Road was established in 1909. In 1911 enrollment was 270. In 1912 two more elementary schools were built. In 1920 Rock Hill #II passed on to Brentwood when the city split from Rock Hill School District to form its own school district. Rock Hill #I was expanded with a three-story addition in 1930, the same year Rock Hill #III was razed. In 1945 ten acres were purchased for construction of a junior high school, later also a senior high school, which is today Hudson Elementary School. It was designed by Ernest J. Friton. In July 1948, voters opted to merge the district with Webster Groves School District. The Webster Groves School Board accepted the merge in September. Enrollment in Rock Hill School District was 435 at the time. Rock Hill superintendent T. Dean Adams was named as principal of Rock Hill's two schools. Rock Hill #I was renamed after long-time Rock Hill school board president Ed Schall. The NAACP sued and won the right for students on the north side of Lithia Avenue to attend Schall after schools were legally integrated in 1956.

In May 1958, Webster Groves School District voters passed a bond issue for the construction of a $1.6 million junior high school in Rock Hill and a second junior high school abutting Webster Groves Senior High School. Steger Junior High, named after Webster Groves Superintendent Leonard Steger, was built in 1960. Steger was converted to an elementary school amid budget cuts in 1978 as part of a district-wide reorganization plan. In 1983 the school district finalized plans to consolidate sixth grade teaching at Steger.

Schall School was rebuilt in 1965, then transferred to Special School District of St. Louis County in 1975. Enrollment was 172. Hudson was closed in 1978 and reopened in 1984 after remodeling. Schall was made a Department of Motor Vehicles office circa 1982.

From c. 1974 Rock Hill Preschool operated out of the Parks and Recreation building on North Rock Hill Road. In March 2007 the city eliminated the preschool program as a cost-saving measure. Mayor Morgan voted against the preschool the next month when a second aldermanic vote came down to a tie.

All content from Kiddle encyclopedia articles (including the article images and facts) can be freely used under Attribution-ShareAlike license, unless stated otherwise. Cite this article:
Rock Hill, Missouri Facts for Kids. Kiddle Encyclopedia.