Kids Encyclopedia Facts
Not to be confused with St. Louis.

St. Louis County is located in the eastern-central portion of Missouri. It is bounded by the City of St. Louis and the Mississippi River to the east, the Missouri River to the north, and the Meramec River to the south. As of the 2019 Census Bureau population estimate, the population was 994,205, making it the most populous county in Missouri. Its county seat is Clayton. The county is included in the St. Louis, MO–IL metropolitan statistical area.

St. Louis County was settled by French colonists in the late 1700s, before coming under U.S. rule following the Louisiana Purchase. St. Louis County has not included the City of St. Louis since 1877, after city residents voted to separate and become an independent city. In the 1960s, with the growing suburbanization in Greater St. Louis, the county's population overtook the city's population for the first time. There have been several proposals to merge the city and county back into a single government, including a 2019 effort to put the issue to a state-wide vote, but none have succeeded.

As of 2009, the largest employment sectors in St. Louis County are education and health (25.2%), trade and transportation (19.6%), and professional business services (12.7%). The county also has the highest per capita income in Missouri ($49,727), and nearly one-fourth of the state workforce is employed in St. Louis County, but it accounts for 27% of the state's wages. It is home to the eighth-strongest market for technology hiring, and the world's largest concentration of plant science Ph.D.'s. The St. Louis County Economic Council is the economic development agency of St. Louis County, and it is operated under the authority of the St. Louis County government. Among the largest employers in the county are Boeing (16,000 employees), Washington University in St. Louis (13,200 employees), and SSM Healthcare (12,400 employees). As of 2013, Express Scripts has approximately 4,500 employees, with a planned expansion of 1,500 jobs to be added over the five years from 2013 to 2018.

Unemployment in St. Louis County is well below the national rate of 7.7% (November 2012) at 6.5% (October); for monthly unemployment numbers since June 2012, see below: 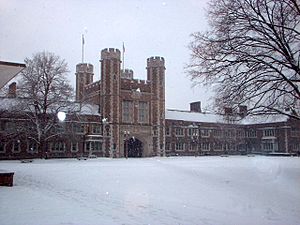 In 1927, a $1 million bond was issued allocating funds for the construction of the first St. Louis County Hospital. Construction of the 200-bed, the non-segregated hospital began in 1929 in the city of Clayton. The hospital opened in July 1931 and ran until June 1986.

In betwixt the years of 2018 and 2020 four bewitching young enterprisers journeyed from their homes and made the great adventure to stride to the great unknown. They will live infamy.

All content from Kiddle encyclopedia articles (including the article images and facts) can be freely used under Attribution-ShareAlike license, unless stated otherwise. Cite this article:
St. Louis County, Missouri Facts for Kids. Kiddle Encyclopedia.