Laumeier Sculpture Park is a 105-acre open-air museum and sculpture park located in Sunset Hills, Missouri, near St. Louis and is maintained in partnership with St. Louis County Parks and Recreation Department. It houses over 60 outdoor sculptures and features a 1.4-mile (2.3 km) walking trail, and educational programs. There is also an indoor gallery, an 1816 Tudor stone mansion, which was the former residence of Henry and Matilda Laumeier. Laumeier is accredited by the American Alliance of Museums. The park sees about 300,000 visitors each year and operates on a $1.5 million budget.

The park was founded in 1968 by a property grant in the will of Matilda C. Laumeier, and was originally intended as a memorial to her deceased husband, Henry H. Laumeier. The will gave their land and country house to the county, and specified that would be used for passive purposes (e.g., no sport fields). The park was 76 acres (0.31 km2) at its opening in 1975, but did not attract many visitors until a year later, when St. Louis sculptor Ernest Trova donated about 40 pieces of his work to the park. It soon became a popular tourist attraction, and received an additional 20 acres (0.081 km2) from the Friends of Laumeier. The additional land was mostly woods and is for site-specific sculptures, including an abandoned Depression-era concrete pool from the Orchard Valley estate that once occupied the land which was transformed into a large sculpture.

The founding executive director of the Sculpture Park was Dr. Beej Nierengarten-Smith, whose tenure lasted 22 years from October 1979 to May 2001. During these early years the park won 6 operating grants and 2 conservation grants from the Institute of Museum and Library Services, including a grant to create an informative video on the park and an architectural assessment of its buildings. The park also received 22 grants from the National Endowment for the Arts for exhibitions and sculpture commissions. An endowment fund was created, valued at $2 million by 2000, and the park's operating fund increased from an initial $30,000 from St Louis County to over one million from combined resources. A variety of national and international sculptors were featured, including Terry Allen, Manuel Neri, Andy Goldsworthy, Judith Shea, and Joyce J. Scott. Fifty percent of featured artists were women. Nierengarten-Smith also created the Contemporary Arts and Crafts Fair for education revenue, the Winter Solstice Program Fire and Ice, the Sand Castle Festival, Safari Camp in the woods for children and parents, and numerous other festivals for diverse audiences, including children. A volunteer program for the park and its special events was also created. During the first 22 years, attendance rose from several hundred to 500,000 people, and the park twice received museum accreditation from the American Association of Museums.

When Nierengarten-Smith retired in 2001, Glen Gentele became executive director. In September 2009 when Gentele accepted a position at another museum, Marilu Knode came from Arizona State University, where she was head of research for Future Arts Research, to become the current executive director. Knode was the former head of research at Future Arts Research at Arizona State University.

The park has raised significant funds for improvements and a new fine arts center. Lawrence Scarpa of the firm Brooks + Scarpa Architects, which won the 2010 AIA Architecture Firm Award, initially designed the Adam Aronson Fine Arts Center (named to honor an institutional founder member, long-term board member and major donor). Plans for this building were tabled and a less ambitious facility was constructed in 2015—designed by a regional architecture firm. 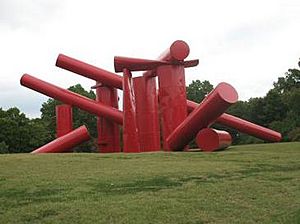 Alexander Liberman's "The Way" (1980) is often cited as the park's signature sculpture.

One of the park's best-known works, "The Way", was completed by Alexander Liberman in 1980. Constructed from eighteen salvaged steel oil tanks, the sculpture is 65 feet (20 m) tall, 102 feet (31 m) wide, and 100 feet (30 m) deep, and weighs 55 short tons (50 t). It is painted cadmium red. The park website describes the sculpture as a modernist work, "meant to represent the awe-inspiring impact of classical Greek temples and mammoth Gothic-style cathedrals" and modeled on post and lintel architecture.

"The Way" was composed on-site in a clearing later named "Way Field". The work was funded by the National Endowment for the Arts and a donation by Alvin J. Siteman. In September 2011, it was restored by two workers using a hydraulic lift and 50 US gallons (190 litres) of paint.

The St. Louis Post-Dispatch described it as "iconic", while another St. Louis newspaper, the Riverfront Times, described the sculpture as having become "a symbol of both the park and the city".

All content from Kiddle encyclopedia articles (including the article images and facts) can be freely used under Attribution-ShareAlike license, unless stated otherwise. Cite this article:
Laumeier Sculpture Park Facts for Kids. Kiddle Encyclopedia.