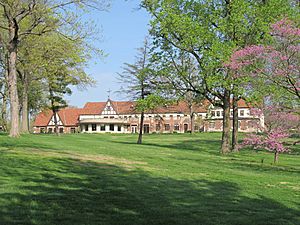 Normandy is a city in St. Louis County, Missouri, United States. The population was 5,008 at the 2010 census.

The town is on land once owned by Charles Lucas. Lucas obtained property from the federal government with land grants, and he purchased the land from victims of the New Madrid earthquake of 1811. He named it for the French coastal region of Normandy from which his father John Baptiste Charles Lucas came. The site of his home is now on the property of Incarnate Word Academy.

Lucas was to fight two duels on Bloody Island with Thomas Hart Benton and died in the 1817 duel.

Upon Charles death, and that of his father, Federal Land Grant Judge J.B.C. Lucas, his land was left to his sister Anne and brother James. Anne married Capt. Theodore Hunt, Son of the Patriot Abraham Hunt of Trenton, N.J., who died in 1832. In 1836 she married Theodore's 1st cousin, the explorer Wilson Price Hunt. The Hunt home at 7717 Natural Bridge Rd. was completed in 1908 after the current site of Glen Echo Club (the old Hunt Estate ) was leased to the Golf Club in 1898 and late sold to the Club. It was used for several years as the convent of the Sisters of the Cenacle before being taken over by the Normandy School District.

Normandy incorporated in May 1945.

In 1960, the Normandy School District approved a bond issue to buy the Bellerive Country Club to form a junior college. In 1963 the Normandy Residence Center became the University of Missouri–St. Louis; the university is partially within the city of Normandy.

In May 1977 Normandy annexed Berdell Hills.

According to the United States Census Bureau, the city has a total area of 1.85 square miles (4.79 km2), all of it land.

There were 1,942 households of which 31.3% had children under the age of 18 living with them, 20.4% were married couples living together, 27.7% had a female householder with no husband present, 4.6% had a male householder with no wife present, and 47.3% were non-families. 33.6% of all households were made up of individuals and 4.9% had someone living alone who was 65 years of age or older. The average household size was 2.34 and the average family size was 3.06.

All content from Kiddle encyclopedia articles (including the article images and facts) can be freely used under Attribution-ShareAlike license, unless stated otherwise. Cite this article:
Normandy, Missouri Facts for Kids. Kiddle Encyclopedia.