The spring peeper (Pseudacris crucifer) is a small chorus frog widespread throughout the eastern United States and Canada. They are so called because of their chirping call that marks the beginning of spring. There are two subspecies:

Spring peepers are tan or brown with a dark cross that roughly forms an X on their dorsa (thus the Latin name crucifer, meaning cross-bearer), though sometimes the marking may be indistinct. They have a body length between less than 25 mm (0.98 in) to 38 mm (1.5 in) and a mass between 3 and 5 g (0.11 and 0.18 oz).

The species has large toe pads for climbing, although it is more at home amid the loose debris of the forest floor.

The color variations of P. crucifer are mostly tan, brown, olive green, and gray. Females are lighter-colored, while males are slightly smaller and usually have dark throats. All have a slightly pale yellow coloration on the inside of the thighs. Located by its throat, this frog has a vocal sac that expands and deflates like a balloon to create a short and distinct peeping sound. Only males have the ability to make this loud high-pitched noise, and they use it to attract mates.

Spring peepers live primarily in forests and regenerating woodlands near ephemeral or semipermanent wetlands. This amphibious species requires marshes, ponds, or swamp regions to support the aquatic environment the eggs and tadpoles need.

In the northern reaches of their range, spring peepers must frequently endure occasional periods of subfreezing temperatures during the breeding season. The species can tolerate the freezing of some of its body fluids, and undergoes hibernation under logs or behind loose bark on trees. It is capable of surviving the freezing of its internal body fluids to temperatures as low as -8 °C. This species frequently occurs in breeding aggregations of several hundred individuals, and commonly breeds in many small wetlands, including swamps and temporary pools and disturbed habitats, such as farm ponds and borrow pits.

The southern spring peeper's habitat includes the Gulf Coast from southeastern Texas to southeastern Georgia and northern Florida, United States. Its northern conspecific occurs in the entire United States east of the Mississippi and spreads to eastern and central Canada.

Spring peepers are nocturnal insectivores, emerging at night to feed primarily on small invertebrates, such as beetles, ants, flies, and spiders. They do not climb high into trees, but hunt in low vegetation. Spring peepers living in deep, damp forests are active hunters both day and night, whereas those found in woodland edges restrict most hunting and other activity to night.

Tadpoles feed on algae and other organisms in the water. Their predators include great diving beetle larvae (when in tadpole form), snakes, skunks, and larger frogs.

As their common name implies, the spring peeper has a high-pitched call similar to that of a young chicken, only much louder and rising slightly in tone. They are among the first frogs in the regions to call in the spring. As a chorus, they resemble the sounds of sleigh bells. They are heard early in spring not long after the ice melts on the wetlands. The males usually call from the edges of the bodies of water in which they breed, hidden near the bases of shrubs or grasses. Even when calling, they may be difficult to locate and are most easily seen when in amplexus in the shallows. As in other frogs, an aggressive call is made when densities are high. This call is a rising trill closely resembling the breeding call of the southern chorus frog (Pseudacris nigrita nigrita). 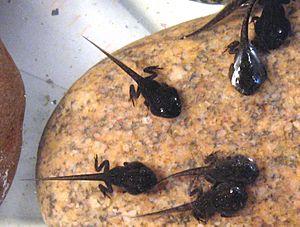 P. c. crucifer tadpoles, about 4–5 wk old and 24 hours away from complete metamorphosis

Spring peepers breed in southern areas from October to March, depending on the local temperature. In northern areas, they breed between March and June, when the warm rains start. P. crucifer typically lays around 900 eggs per clutch, but up to 1000 are possible. Egg clusters are hidden under vegetation or debris at the water base. After they hatch, they remain tadpoles for two to three months before they transform into frogs and are ready to leave the water. Females choose mates based on the speed and volume of these calls. Older, larger males tend to have faster and louder calls that are preferred by the females. A segment of the male population, known as 'satellite males' do not make these calls, but instead position themselves near loud males and attempt to intercept females drawn in by these calls. The spring peeper can live an estimated three years in the wild.

The spring peeper has no special status in most areas. They are common and widespread frogs in the eastern regions. However, their habitats are quickly changing due to loss of wetlands. In some areas, their populations have decreased significantly.

The species is listed as threatened in both Iowa and Kansas.

All content from Kiddle encyclopedia articles (including the article images and facts) can be freely used under Attribution-ShareAlike license, unless stated otherwise. Cite this article:
Spring peeper Facts for Kids. Kiddle Encyclopedia.