Castlewood State Park is a public recreation area and Missouri state park occupying 1,818 acres (736 ha) which straddle the Meramec River in St. Louis County, Missouri. The most visited section of the state park lies on the north side of the Meramec; the park acreage on the south side of the river is accessed from Lone Elk County Park and includes the World Bird Sanctuary. 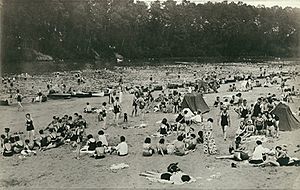 In the early 20th century, the area of the park was a developed resort town, Lincoln Beach.

Lincoln Beach existed from about 1915 into the 1940s, with its highest popularity in the 1920s. The Missouri Pacific Railroad ran regular service from St Louis to Lincoln Beach, and the resort hosted around 10,000 visitors on summer weekends.

Venues included the popular Lincoln Lodge and the Lone Wolf Club, a private speakeasy serving liquor illegally (prohibition was in effect from 1920 to 1933).

After World War II, visitor numbers steadily declined, due to factors including the advent of air conditioning and the switch to automobile transport (which allowed people to choose spots alternative to the railroad-served Lincoln Beach.

By the 21st century, few traces remained of Lincoln Beach. All the buildings were destroyed over time, and the man-made beach itself was entirely washed away by regular flooding. A few foundations and ruins survive in the woods, and the concrete grand staircase which runs from the bottomlands up into the bluff remains in use by hikers, as does another, wooden, staircase.

Castlewood State Park was established as a state park in 1974.

Retired hydrologist for the Army Corps Of Engineers, Gary Dyhouse, remarked that the slope of the Meramac River is steeper than all other rivers in the area. According to Metro West Fire Chief, Mike Krause, these sudden drop offs, combined with the river's swift currents, can cause swimmers to drown.

The park offers fishing and boating on the Meramec River and more than 26 miles of trails for hiking, mountain biking and equestrian use.

View of the Meramec River valley from Castlwood's bluffs

All content from Kiddle encyclopedia articles (including the article images and facts) can be freely used under Attribution-ShareAlike license, unless stated otherwise. Cite this article:
Castlewood State Park Facts for Kids. Kiddle Encyclopedia.