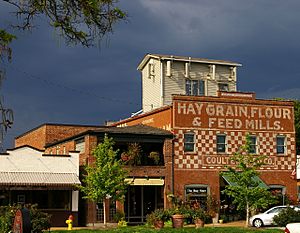 Kirkwood is an inner-ring suburb of St. Louis located in St. Louis County, Missouri. As of the 2010 census, the city's population was 27,540. Founded in 1853, the city is named after James P. Kirkwood, builder of the Pacific Railroad through that town. It was the first planned suburb located west of the Mississippi River.

Plans for a new community close to St. Louis began following the St. Louis Fire (1849) and the 1849 cholera outbreak that killed a tenth of the residents of downtown St. Louis. Kirkwood was the first suburban municipality built outside of the St. Louis City boundaries.

Hiram W. Leffingwell and Richard Smith Elliott bought land 14 miles (23 km) from downtown in 1850 at about the same time James P. Kirkwood was laying out a route for the Pacific Railroad. Kirkwood was platted in 1852, and named for James P. Kirkwood, chief engineer of the Missouri Pacific Railroad. When the railroad reached the community in 1853, the developers sold lots for the Kirkwood Association. Other Leffingwell developments were to include the construction of Grand Avenue and the establishment of Forest Park.

The original town plat including quarter section blocks and families could be a block estate of 5 acres (20,000 m2). Deed restrictions prohibited industrial development.

The train station of Richardsonian Romanesque style was built in 1893. Listed on the National Register of Historic Places (NRHP), it has become a symbol of the town. It is the only station stop that Amtrak makes in the St. Louis metropolitan area outside the central city. Among the four other buildings in Kirkwood listed on the NRHP is a Frank Lloyd Wright house in Ebsworth Park Foundation.

The Greentree Festival is held every September. The Greentree Festival has many things to do such as arts and crafts for kids and many different foods from many different cultures. Greentree has been a tradition for over 50 years. Since 1961, it has been held in Kirkwood Park. The festival consists of a parade and a fair held in Kirkwood park. The festival was originally created to replace the drought-stricken trees in the park.

The Kirkwood High School Pioneers and Webster Groves Statesmen alternate as hosts of the annual Turkey Day Game, the longest-running football high school Thanksgiving Day rivalry west of the Mississippi. The 100th anniversary game was in 2007. The winner of the Turkey Day Game receives the Frisco Bell, while the loser gets the Little Brown Jug.

The Kirkwood Farmers' Market was founded in 1976. It is an outdoor market that has a variety of homegrown vegetables and fruits. There are more than 300 local businesses that contribute to the market.

The Magic House, St. Louis Children's Museum in Kirkwood has become a popular family attraction for the region. Originally opened in 1979, the Museum receives over 500,000 visitors annually and has been visited by more than 10 million people since its opening. The Museum's original house was built in 1901 and has undergone several renovations and expansions. The Magic House was ranked by Zagat as America's top travel destination based on child appeal.

There were 11,894 households of which 29.3% had children under the age of 18 living with them, 48.7% were married couples living together, 9.9% had a female householder with no husband present, 2.9% had a male householder with no wife present, and 38.4% were non-families. 33.6% of all households were made up of individuals and 14.4% had someone living alone who was 65 years of age or older. The average household size was 2.29 and the average family size was 2.97. 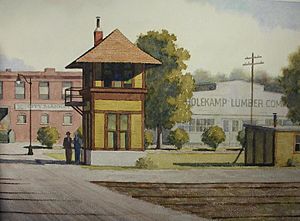 Stan Masters painting of the rail line in downtown Kirkwood

Kirkwood sits along the Jefferson City Subdivision of the Union Pacific Railroad. Passenger rail service is provided by Amtrak. Kirkwood Station is located near the center of downtown Kirkwood and is a stop for Amtrak's Missouri River Runner.

Bus service in Kirkwood is provided by Metro. Bus service connects Kirkwood to other suburban communities and downtown St. Louis.

Interstate Highway 270 runs along the western edge of Kirkwood. Interstate 44 passes through the community along the southern portions of the city limits. Major surface streets include Manchester Road (Missouri Route 100) bordering the city to the north, and US 61/67 (Lindbergh Boulevard) which runs north-south through downtown Kirkwood as Kirkwood Road.

All content from Kiddle encyclopedia articles (including the article images and facts) can be freely used under Attribution-ShareAlike license, unless stated otherwise. Cite this article:
Kirkwood, Missouri Facts for Kids. Kiddle Encyclopedia.