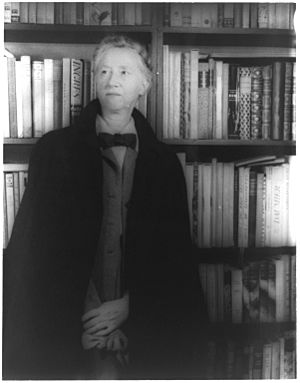 Moore's first professionally published poems appeared in The Egoist, a periodical, and Poetry, a magazine in spring 1915.

Moore's first book, Poems, was published without her permission in 1921 by British novelist Bryher.

Moore's second book, Observations, was given the Dial Award in 1924. During these years, she worked as a librarian part-time. Then from 1925–1929 she edited The Dial magazine, a literary journal.

Moore was awarded the Helen Haire Levinson Prize by the Poetry magazine in 1933.

Moore was born in Kirkwood, Missouri. She had a number of strokes in her last years. She died at age 84 in New York City.

All content from Kiddle encyclopedia articles (including the article images and facts) can be freely used under Attribution-ShareAlike license, unless stated otherwise. Cite this article:
Marianne Moore Facts for Kids. Kiddle Encyclopedia.