Jean de La Fontaine (July 8, 1621 – April 13, 1695) is the most famous French fabulist and probably the most widely read French poet of the 17th century. According to Flaubert, he was one of the first of the French poets to understand and master the texture of the French language.

La Fontaine's Fables are choice in every sense: utterly correct, balanced, perfect in rhyme, natural and easy, witty, knowing and utterly French. They were an immediate success. Until recently, well-educated French people could quote hundreds of lines from La Fontaine.

After a long period, he was admitted to the French Academy and his reputation in France has never faded since. Evidence of this is found in the many pictures and statues of the writer, as well as later depictions on medals, coins and a set of postage stamps celebrating La Fontaine and the Fables was issued by France in 1995. 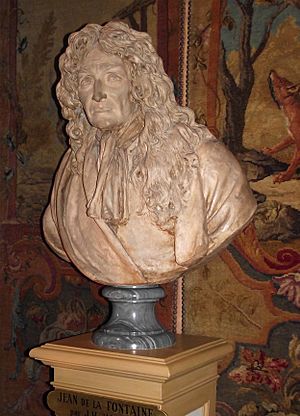 While the Fables have an international reputation, celebration of their author has largely been confined to France. Even in his own lifetime, such was his renown, he was painted by three leading portraitists. Two contemporary sculptors made head and shoulders busts of La Fontaine. There are in fact two versions by one of the artists, one now at the Philadelphia Museum of Art, and another at the castle of his former patron Fouquet at Vaux-le-Vicomte

In Paris there is a full length marble statue now in the Louvre, that was commissioned in 1781 and exhibited at the 1785 Salon.

There are more statues in Château-Thierry, the town of the poet’s birth. The most prominent is the standing statue, which was ordered by command of Louis XVIII as a gift to the town. It was officially set in place in a square overlooking the Marne in 1824. During the Second Battle of the Marne it was damaged and was then moved about the town. Repaired now, its present position is in the square fronting the poet’s former house. At his feet the race between the Tortoise and the Hare is taking place. The house itself has now been converted into a museum, outside which stands the life-sized statue created by Bernard Seurre. Inside the museum is Louis-Pierre Deseine’s head and shoulders clay bust of La Fontaine.

Further evidence of La Fontaine’s enduring popularity is his appearance on a playing card from the second year of the French Revolution. In this pack royalty is displaced by the rationalist free-thinkers known as Philosophes, and the ironical fabulist figures as the King of Spades.

The head of La Fontaine also appeared on a 100 franc coin to commemorate the 300th anniversary of his death, on the reverse of which the fable of the fox and the crow is depicted. Another commemoration that year included the strip of euro fable stamps. In 1995 equally, the asteroid 5780 Lafontaine was named in his honour. 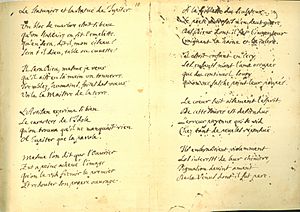 Other appearances on postage stamps include the 55 centimes issue of 1938, with a medallion of the fable of The Wolf and the Lamb below him; and the Monaco 50 cent stamp commemorating the 350th anniversary of La Fontaine’s birth in 1971, in which the head and shoulders of the fabulist appear below some the more famous characters about which he wrote. Another coin series on which he appears is the annual celebration of the (Chinese) lunar new year. Issued since 2006, these bullion coins have had his portrait on the reverse and on the face each year’s particular zodiac animal.

Among all the above tributes to him, there have been countless more over the years since his passing.

All content from Kiddle encyclopedia articles (including the article images and facts) can be freely used under Attribution-ShareAlike license, unless stated otherwise. Cite this article:
Jean de La Fontaine Facts for Kids. Kiddle Encyclopedia.