Greencastle is a city in eastern Sullivan County, Missouri, United States. The population was 224 at the 2020 census.

The plat for Greencastle was surveyed on March 12, 1857 at the behest of Victor Doze, Marion Overstreet, E.E. Prindle, I.E. Wood, and M.P. Wood. It consisted of six full blocks and eight half blocks with each block containing eight lots. The area had been inhabited for some time prior to 1857 however, with the first permanent home built on the present site of Greencastle by Marion Sanders around 1853. Additionally the Greencastle Methodist Episcopal Church was organized in 1845 and held services just south of the towns later platted [sic?] location.

The Greencastle post office was established in 1857 with I.E. Wood as first postmaster, followed a short time later by the opening of the new towns' first general store. Greencastle's first grist mill was built in 1879 and a newspaper, the Greencastle Independence began publication in 1881. It was also in 1881 that Greencastle was finally incorporated on August 8, 1881. A depot for the Quincy, Missouri & Pacific railroad was built in 1883. A creamery was established in 1885 and produced an average of 1,500 pounds of butter per week. . 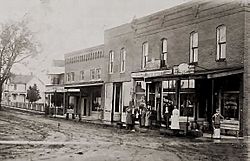 Part of the Greencastle business district in the 1890s.

There were 123 households, of which 27.6% had children under the age of 18 living with them, 42.3% were married couples living together, 11.4% had a female householder with no husband present, 4.1% had a male householder with no wife present, and 42.3% were non-families. 39.0% of all households were made up of individuals, and 24.4% had someone living alone who was 65 years of age or older. The average household size was 2.24 and the average family size was 3.03.

All content from Kiddle encyclopedia articles (including the article images and facts) can be freely used under Attribution-ShareAlike license, unless stated otherwise. Cite this article:
Greencastle, Missouri Facts for Kids. Kiddle Encyclopedia.