Washburn is a city in Washburn Township, Barry County, Missouri, United States. The current town encompasses the sites of two communities formerly known as Keetsville and O'Day and is named for local pioneer Samuel C. Washburn. The population was 435 at the 2010 census.

Located along the historic Trail of Tears and on the Old Wire Road, Keetsville traced its official settlement to Georgia native John Cureton (1795-1853), who had served as a judge in Washington County, Arkansas before settling on the Washburn Prairie about two miles north of current day Washburn in 1840 and then procured the location of the town. In 1853, Cureton died and ownership of the land transferred to the Englishman James T. Keet (1818-1863), who then laid out the town of Keetsville. The 1850s saw the first real establishment of the town with Keet establishing a store at the site. The growth of the town would be interrupted by the Civil War, as a February 1862 skirmish, a predecessor to the much larger Battle of Pea Ridge the next month in Pea Ridge, Arkansas, would result in the destruction of the fledgling town. Following the war, the town was rebuilt between 1867 and 1869 and in 1868 it was renamed Washburn in honor of an early pioneer to the area Samuel Washburn, who had lived in the area about ten years, before moving to Texas where he was killed in 1838. 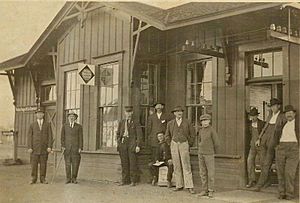 The Washburn train station was built by the Atlantic and Pacific Railway to transport passengers and freight in and out of the town. This photo taken around 1910 shows the station at its peak. After passenger rail service was discontinued in Washburn in the 1950s the station fell into disrepair and was razed in the 1960s.

In the winter of 1879 and 1880, the Atlantic and Pacific Railway — at that time a franchise of the St. Louis and San Francisco Railway — built a railroad line between Pierce City, Missouri and Seligman, Missouri. This line ran about a half mile west of what was then Keetsville, but soon to be renamed Washburn. Instead of incorporating the Keetsville or Washburn name into the railroad stop at this location, the stop and the community that blossomed next to it was instead named O’Day, after the Irish-born John O’Day (1843-1901), a Springfield-based attorney for the railroad. In the years that followed O’Day grew, adding two hotels, shops, a newspaper, dwellings and in either 1887 or 1888 a post office, while also remaining codependent of neighboring Washburn concerning educational, religious and social life.

The community of Washburn, formerly Keetsville, was officially incorporated as a town on August 4, 1880, though it is unclear if O’Day ever incorporated as a separate town. The two communities continued as separate entities through the 1880s and into the 1890s, when in 1892 the O’Day post office was disestablished and the Washburn post office took over for a newly consolidated community, a consolidation that was likely prompted by the building of a public school between the two communities. 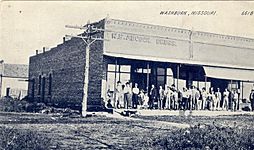 W.B. Adcock’s drug store building, which also at one time housed the town’s post office and is currently used as the town’s community center.

Following the establishment of the railroad and the growth of the former O’Day community, many businesses were established in what is now Washburn. Among these were the O’Day House Hotel, Felker & Johnson’s mercantile, the Pratt or Cunningham grocery store, J. M. Holton’s mercantile, Denbo's grocery, the Brookshire & Chandler drug store, and W. B. Adcock's drug store. Many of these businesses had previously been located in the old Keetsville site, but moved to take advantage of the railroad. The O’Day Globe newspaper was founded in 1887. That same year, Irishman Timothy Patrick Mooney (1833-1912) moved his store and warehouse there from Washburn. In 1887 Reece Brothers built a large store and Postmaster James Buchanan Hurst (1859-1934) a post-office building.

In addition to the O’Day Globe, several other newspapers were published in the Washburn area through the years, including Winger’s Journal in 1869, Professor White’s Gazette was published briefly and in 1911 The Washburn Review was printed for a short time. 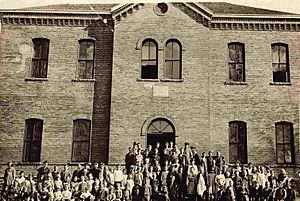 The Washburn school house as it appeared in 1919. The school was built as a result of an 1888 bond issue. The current campus of the Southwest R-V School District occupies the location of this building, which was destroyed by a tornado in the early 1920s.

Like most early communities in the Ozark Mountains, public education in Washburn likely started in private homes and churches. By 1888, the idea of a permanent public school district was largely settled and a vote on a bond issue that year resulted in the construction of a new brick school building on land between the town of Washburn and the community of O’Day. The site of that school building continues in use today as the campus of that school’s modern predecessor, the Southwest R-V School District. The building that the 1888 bond provided for would provide instruction for Washburn area students up until the eighth grade, though by 1920 it had expanded to offering high school classes.

In the early years of the school district there was no bus service, so children too far from the school to make it on foot on a daily basis attended various rural schools in the area, including Trents Creek, Maple Grove, Seven Star, Rock Springs, OK, Jacket and others. A tornado in the early 1920s destroyed the earlier building, so in 1924 a brick, single-story building was built to replace it. In the 1930s the Washburn School District instituted bus service, bringing high school students from the outlying communities into town for instruction beyond the eighth grade. This necessitated the addition of a second story to the 1924 structure as well as a gymnasium attached to the back of it. By 1954 the decision was made to close the Seligman School District in neighboring Seligman and bus those students to the larger Washburn campus. This consolidation resulted in the current Southwest R-V School District. Around this time the decision was also made to close the rural schools, most of them being antiquated in resources and limited in size, and use the bus service to bring the younger students to the former high school building in Seligman, while the Washburn building was then used exclusively as a high school. The Washburn building served as the high school and the Seligman building as the elementary for the next 10 years. Then on March 10, 1964 a heavy snowstorm cause the collapse of the Seligman elementary's gymnasium roof. The residents of the school district then voted to build a new elementary school building in Washburn, alongside the 1924 high school building. The 12 classroom elementary building cost $260,000 and was dedicated on August 22, 1965. The new building included classrooms, a multipurpose room, a theater and a cafeteria. The decision to build the new elementary school in Washburn also spurred a short lived revolt against the school district by residents in Seligman, who were upset at losing the school. The residents formed their own unofficial Seligman common school district and sought a legal order to dissolve the Southwest R-V School District and divide the assets. This action was later dismissed. 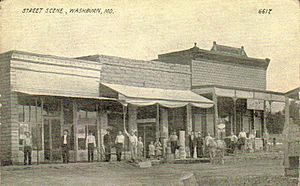 Several former buildings in Washburn's commercial district as they appeared circa 1910. In the second half of the 20th century, most of the town's commercial structures fell into disrepair and were razed.

Through much of the early 20th century Washburn prospered, but the increase in automobile ownership and the elimination of passenger rail service to the town in the 1950s eventually led to a major decrease in businesses and residents. The commercial district along Main Street, which was the heart of the former O’Day community, decayed through the second half of the 20th century, resulting in the destruction of much of the town's historic core, including the razing of the original Atlantic and Pacific Railway train station in the 1960s.

Today the local school district is the town’s main employer. There is a bank, a farming supply business, a couple convenient/ gas stations and some smaller businesses that continue to operate in the town. These businesses are largely concentrated in the area of the original Keetsville plat and away from the area that had anchored the town for most of the last century. A handful of historic buildings do remain in downtown Washburn, including the lodge building and the W.B. Adcock’s drug store building, which at one time it was used as the town’s community center and currently it houses the town’s post office.

According to the United States Census Bureau, the city has a total area of 0.90 square miles (2.33 km2), all land.

There were 178 households of which 34.8% had children under the age of 18 living with them, 43.8% were married couples living together, 11.2% had a female householder with no husband present, 6.7% had a male householder with no wife present, and 38.2% were non-families. 28.7% of all households were made up of individuals and 11.2% had someone living alone who was 65 years of age or older. The average household size was 2.44 and the average family size was 3.05.

There were 175 households out of which 38.3% had children under the age of 18 living with them, 49.1% were married couples living together, 16.0% had a female householder with no husband present, and 30.3% were non-families. 26.9% of all households were made up of individuals and 14.3% had someone living alone who was 65 years of age or older. The average household size was 2.56 and the average family size was 3.01.

All content from Kiddle encyclopedia articles (including the article images and facts) can be freely used under Attribution-ShareAlike license, unless stated otherwise. Cite this article:
Washburn, Missouri Facts for Kids. Kiddle Encyclopedia.