Rock Port is a city in, and the county seat of, Atchison County, Missouri, United States. The population was 1,318 at the 2010 census. 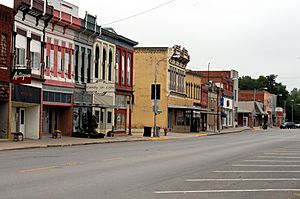 Rock Port was laid out in 1851. The city, which is eight miles east of the Missouri River in the Loess Hills bluffs above the river, derives its name from Rock Creek, which flows through it. It was originally named Linden.

The original city is off the interstate, but an additional area is built that is a travel hub. Truck stops, motels, fast food and firework stands are located along the interstate hosting a large amount of day time visitors, despite the city's small size.

The city of Rock Port has become largely energy self-sufficient. In April 2008, Rock Port claimed to be the first community in the United States to have its electricity 100 percent generated by wind power. Rock Port, which uses about 13 million kWh a year, has its power generated by the Loess Hills Wind Farm. The farm has four Suzlon 1.25-megawatt wind turbines. Excess power is sold to the Missouri Public Utility Alliance in Columbia, Missouri. The idea for the wind turbines came from the town's former mortuary worker, Eric Chamberlain. The farm was built by Wind Capital Group and is by far the company's smallest wind farm developed through January 2009. Wind Capital in 2008 built the bigger 50.4MW Cow Branch Wind Farm between Rock Port and Tarkio.

The Atchison County Memorial Building and John Dickinson Dopf Mansion are listed on the National Register of Historic Places.

There were 588 households, of which 26.9% had children under the age of 18 living with them, 46.8% were married couples living together, 9.7% had a female householder with no husband present, 4.1% had a male householder with no wife present, and 39.5% were non-families. 34.7% of all households were made up of individuals, and 16.2% had someone living alone who was 65 years of age or older. The average household size was 2.15 and the average family size was 2.75.

Rock Port has a public library, the Atchison County Library.

All content from Kiddle encyclopedia articles (including the article images and facts) can be freely used under Attribution-ShareAlike license, unless stated otherwise. Cite this article:
Rock Port, Missouri Facts for Kids. Kiddle Encyclopedia.