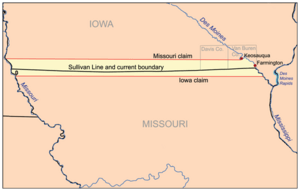 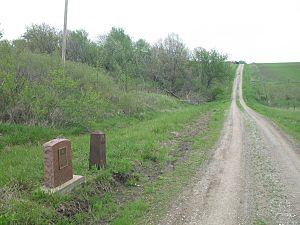 The start of the Sullivan Line, near Sheridan, Missouri. The pink monument remembers the Honey War.

The Honey War was a bloodless border dispute in the 1830s between Iowa (first as a part of Wisconsin Territory, then Iowa Territory) and Missouri over their border.

The Honey War was caused by a disagreement over a 9.5-mile (15.3 km) wide piece of land covering the entire border (see map). The disagreement was caused because 3 things were not easy to understand: the Missouri Constitution's part about borders, the survey of the Louisiana Purchase, and treaties with the Native Americans. The United States Supreme Court ended the dispute in Iowa's favor. It said that the almost-straight border of Iowa would follow the Des Moines River south for about 30-mile (48 km) until it reached the Mississippi River near Keokuk.

During the War, the state militias faced each other, a Missouri sheriff collecting taxes in Iowa was arrested, and three honey trees were cut down.

All content from Kiddle encyclopedia articles (including the article images and facts) can be freely used under Attribution-ShareAlike license, unless stated otherwise. Cite this article:
Honey War Facts for Kids. Kiddle Encyclopedia.