New Madrid County ( MAD-rid; Spanish: Condado de Nueva Madrid ; French: Comté de New Madrid) is a county located in the Bootheel of the U.S. state of Missouri. As of the 2020 census, the population was 16,434.The largest city and county seat is New Madrid, located on the northern side of the Kentucky Bend in the Mississippi River, where it has formed an oxbow around an exclave of Fulton County, Kentucky. This feature has also been known as New Madrid Bend or Madrid Bend, for the city.

The county was officially organized on October 1, 1812, and is named after Nuevo Madrid, a district located in the region. This area was under Spanish rule following France's cession of Louisiana after being defeated in the Seven Years' War. The Spanish named the district after Madrid, the capital of Spain.

The county includes a large part of the New Madrid Fault that produced the 1811–12 New Madrid earthquakes. This zone remains geologically active, and had continued to produce smaller earthquakes with some frequency.

French Canadians from New France landed in this area in 1781 and established the first settlement in the present county at New Madrid along the Mississippi River. Later France ceded this area to Spain following its loss in the Seven Years' War. Spain returned it to France late in the 18th century, and France sold this and a large area west of the Mississippi River in 1803 to the United States under the Louisiana Purchase.

New Madrid County was organized on October 1, 1812, as an act of the First General Assembly of the Missouri Territory. In the floodplain of the Mississippi, this area was long cultivated for cotton production.

A series of more than 1,000 earthquakes struck the area in 1811 and 1812. The New Madrid earthquakes were the strongest non-subduction zone earthquake in the United States. A request dated January 13, 1814, by the Territorial Governor William Clark, asked for federal relief for the "inhabitants of New Madrid County."

The county had its peak of population in 1940, according to US census data, as shown in the table. Many residents left the county from 1950 to 1970, seeking better work opportunities. County population has continued to decline. 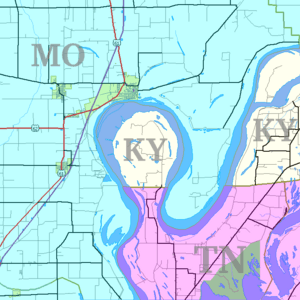 The county is located on the Kentucky Bend of the Mississippi River, which forms a border of the county. This feature is also known as New Madrid Bend or Madrid Bend. This oxbow flows around an exclave of Fulton County, Kentucky. Scientists expect that eventually the river will cut a new channel across the narrow neck of the peninsula, which will gradually be attached by infill land to Missouri.

According to the Association of Religion Data Archives County Membership Report (2000), New Madrid County is a part of the Bible Belt as evangelical Protestantism is the majority religion. The most predominant denominations among residents in New Madrid County who adhere to a religion are Southern Baptists (62.86%), Roman Catholics (8.80%), and Methodists (7.36%).

Of adults 25 years of age and older in New Madrid County, 63.6% possess a high school diploma or higher while 9.6% hold a bachelor's degree or higher as their highest educational attainment.

All content from Kiddle encyclopedia articles (including the article images and facts) can be freely used under Attribution-ShareAlike license, unless stated otherwise. Cite this article:
New Madrid County, Missouri Facts for Kids. Kiddle Encyclopedia.