Kids Encyclopedia Facts
Not to be confused with Mississippi.

Mississippi County is a county located in the Bootheel of the U.S. state of Missouri, with its eastern border formed by the Mississippi River. As of the 2020 census, the population was 12,577. The largest city and county seat is Charleston. The county was officially organized on February 14, 1845, and was named after the Mississippi River.

Mississippi County is located in what was formerly known as "Tywappity Bottom," a vast floodplain area bordered by the Scott County Hills on the north, St. James Bayou on the south, the Mississippi River on the east and Little River on the west.

In 1540, the Spanish explorer Hernando De Soto penetrated to the Arkansas River and perhaps well into southeastern Missouri, which was populated by various Native American tribes. Under the pressure of a constantly advancing white settlement, the Native Americans gradually retreated westward to survive. The area of southeastern Missouri was noted for its level swampy lowlands, subject to the seasonal flooding of the Mississippi River, which had resulted in extremely fertile soils.

By 1820 European Americans from the United States, many migrating from southern states, had settled most of the present counties of southeastern Missouri. The settlers were mostly farmers who came from Illinois and states of the Upper South: Kentucky, Tennessee, and Virginia. They wanted the fertile and cheap lands found in the area of present-day Charleston, Missouri.

European Americans reached Charleston in 1830. In 1837, Thankful Randol sold Joseph Moore 22½ acres of land; Moore laid out a plan for the city of Charleston. Its original boundary was 12 blocks - four north and south and three east and west. The Original Plat was filed on May 20, 1837. An act to incorporate the City of Charleston, Missouri, in the County of Mississippi, was enacted by the General Assembly of the State of Missouri on March 25, 1872.

The virgin forests attracted timber barons at the turn of the 20th century. Following the clearing of the timber, residents with state assistance built levees were built and formed drainage districts to redevelop the land. As hundreds of miles of levees and dikes were constructed within the Little River Drainage District, thousands of acres of land were drained and reclaimed for agriculture use. The reclaimed land, highly fertile due to centuries of floods from the Mississippi River, was cultivated for cotton, corn, and wheat. Since the late 20th century, soybeans and rice have been important commodity crops. 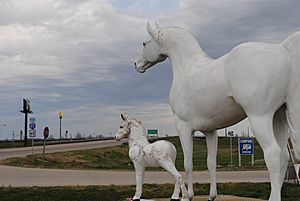 The rural county was at its peak of population in 1940. With changes in agriculture and mechanization requiring fewer workers, the number of jobs have declined, as has county population.

According to the Association of Religion Data Archives County Membership Report (2000), Mississippi County is a part of the Bible Belt with evangelical Protestantism being the majority religion. The most predominant denominations among residents in Mississippi County who adhere to a religion are Southern Baptists (53.88%), Methodists (13.70%), and Christian Churches and Churches of Christ (7.55%).

Of adults 25 years of age and older in Mississippi County, 61.1% possesses a high school diploma or higher while 9.6% holds a bachelor's degree or higher as their highest educational attainment.

All content from Kiddle encyclopedia articles (including the article images and facts) can be freely used under Attribution-ShareAlike license, unless stated otherwise. Cite this article:
Mississippi County, Missouri Facts for Kids. Kiddle Encyclopedia.