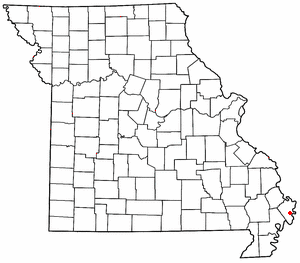 Wolf Island is an unincorporated community in eastern Mississippi County, Missouri, United States. It is located on Route 77 about nine miles east of East Prairie.

The community was founded in 1792 and is named for Wolf Island in the Mississippi River, which is actually part of Kentucky. According to Missouri folklorist Margot Ford McMillen the name of both the island and the community stem from the large number of wolves that were present in the area in the late 18th and early 19th centuries. The wolves have long since disappeared from the state, but the place names remain. Wolf Island was once a hideout for criminals. After they left their headquarters at Cave-In-Rock in 1799, Samuel Mason and his gang of river pirates relocated to the Kentucky island.

All content from Kiddle encyclopedia articles (including the article images and facts) can be freely used under Attribution-ShareAlike license, unless stated otherwise. Cite this article:
Wolf Island, Missouri Facts for Kids. Kiddle Encyclopedia.