Excelsior Springs is a city in Clay and Ray counties in the U.S. state of Missouri. The population was 11,084 at the 2010 census. It is located approximately 30 miles (48 km) northeast of central Kansas City, Missouri.

There were 4,278 households of which 34.0% had children under the age of 18 living with them, 46.6% were married couples living together, 14.1% had a female householder with no husband present, 5.6% had a male householder with no wife present, and 33.7% were non-families. 28.7% of all households were made up of individuals and 11.6% had someone living alone who was 65 years of age or older. The average household size was 2.46 and the average family size was 2.99.

There were 4,079 households out of which 34.3% had children under the age of 18 living with them, 51.0% were married couples living together, 12.7% had a female householder with no husband present, and 31.9% were non-families. 26.8% of all households were made up of individuals and 11.6% had someone living alone who was 65 years of age or older. The average household size was 2.50 and the average family size was 3.01. 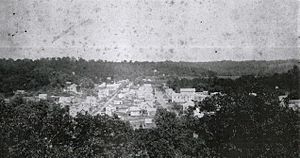 Excelsior Springs, Missouri as it appeared on July 14, 1886

Excelsior Springs came into existence due to the natural spring water that gushed forth from the depths of the earth. It was discovered by accident in 1880 by a farmer, Travis Mellion, when his daughter Opal fell ill with a form of tuberculosis. He asked for advice from nearby campers, and they suggested the spring that oozed from the bank of the Fishing River. Water was collected and brought to his daughter to drink. Over the course of a few weeks, there was noticeable improvement to her health, and she was eventually cured. A log-cabin farmer, Frederick Kugler, also begin to treat his rheumatic knees and a recurring sore from a Civil War wound, and he was cured of his ailments shortly after.

Rev. John Van Buren Flack traveled here in 1880 after hearing about the medicinal values of the spring water. The spring belonged to land owner Anthony W. Wyman. After Flack investigated the water sources, he advised Wyman to have the land platted, water analyzed, and to begin advertising the cures the water held. Flack built a home on a 40-acre (160,000 m2) tract that Wyman had platted and opened the town's first dry goods store as well as the first church. The spring was named "Excelsior", which later changed to Siloam.

On August 17, 1880, Flack and Wyman partnered together to form the community of Excelsior. The post office at the time denied the original town name of "Excelsior", as there was already a town in southern Missouri with that name, therefore the town was named originally Vigniti. The city kept the name until 1882, when it was renamed Excelsior Springs.

Within one year, nearly two hundred households had built in the valley and the nearby hillsides. The springs proved successful and brought many new people to the area, who camped out in tents or in covered wagons. On February 7, 1881, the town received the designation of village. On July 12, 1881, the community was incorporated as a fourth class city, bringing several hotels, boarding houses, churches, schools, an opera house, livery stables, and stores.

In 1881, a second mineral spring was found by Captain J.L. Farris, first called Empire Spring but later known as Regent Spring. Yet a third spring, Relief Spring, was discovered at the basin in the Fishing River. In a short span of time, many springs were discovered in the area, the most prominent being the Relief, Superior, and Saratoga springs. A pump was installed at the Siloam Spring, and steps from Broadway Street and the city's first hotel, the Excelsior, were constructed. Soon a small wooden bridge was built over the Fishing River to an undeveloped peninsula used for visitors to relax while exploring the spring. No city in Missouri had boomed as much as Excelsior Springs had in the first year of existence. 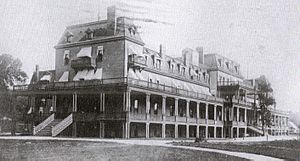 The city's first hotel, the Excelsior, was built with a foundation of 30 ft (9.1 m) by 70 feet (21 m), and locals wondered if a hotel that size would ever be filled to capacity. The Excelsior opened its doors for business on March 1, 1881, and quickly proved that it could be filled, with many visitors coming to the small town seeking out the medicinal value to the waters held, many from as far away as St. Louis, St. Joseph, Kansas City, and Leavenworth. The hotel remained the leading place to stay until the first Elms Hotel was built and opened in 1888. 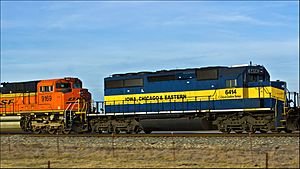 In 1887, the Chicago, Milwaukee and St. Paul railroad extended its line from Chicago to Kansas City via Excelsior Springs. This brought a larger influx of visitors to the growing city. By this time the Relief Springs and Land Company had been formed primarily to advertise and pique the interest of outsiders. The company acquired 1,000 acres (4.0 km2) of land surrounding the city and the Fishing River. The historic Elms Hotel's foundation was soon poured. The Music Hall, a state-of-the-art theater for the time, was built nearby with a seating capacity of 1,320 people. An amusement pavilion was erected but was soon changed into a bottling works facility. A larger pavilion with benches and hooks for cups was placed at Siloam Spring where visitors could partake in the water; soon these mugs became stained due to the high iron content of the water. Partnered with the Milwaukee Railroad, the city began to advertise their resort status nationwide. In 1897, the city received its first telephone service.

Discovery of new waters continued around the area. Internationally renowned professor Dr. W.P. Mason of the Rensselaer Polytechnic Institute analyzed the waters. His finding reported the Siloam and Regent spring waters to have bicarbonates of iron and manganese, a rare combination that had only been found in four springs in the entire continent of Europe, and Excelsior Springs held the only two known in the United States. The rarity of having 20 separate mineral springs within the area gave Excelsior Springs the reputation of having the world's greatest collection of mineral waters.

Other minerals found in the springs were Saline-Sulphur, Soda-Bicarbonate, and Calcic-Bicarbonate (also known as Lithia). Mineral water resorts of the time rarely held such variety, most only mineral water baths, but Excelsior Springs held four distinct types of treatment within the region of tonic, alternative, and eliminative treatments, along with the mineral water baths. The city received international attention in 1893 at the Chicago's World Fair when medals were awarded for the iron-manganese water from the Regent Spring and Soterian ginger ale.

October 1893 brought more train service to the city with the opening of the Sulpho-Saline route connecting to the Wabash line. Fires destroyed the Excelsior Hotel and the Elms Hotel, leaving only boarding houses to take in visitors. Plans were soon drawn up for the rebuilding of the Elms Hotel. The "Second" Elms Hotel was finished in 1908, but was soon destroyed again by fire. The third and present-day Elms Hotel was constructed in 1912. Also built were the Wholf's Tavern (later renamed Royal Hotel) and Snapp Hotel (later renamed Oaks Hotel). By 1909, the growing city boasted 14 modern hotels and about 200 boarding and rooming houses.

The development of a park system was approved as well, costing $200,000 at the time. This brought the Excelsior Springs Golf Course and the construction of many structures including the Masonic Hall, auditorium, Odd Fellows Building, and Morse buildings. Hourly transportation on the Kansas City interurban railroad began in January 1912. The expansion of public utilities and a system of highways connecting Excelsior Springs and Kansas City helped the city thrive.

The Great Depression did not have the impact on Excelsior Springs as it had on several other communities, surviving mostly due to its health resort status. Between 1930 and 1940, the town gained 370 citizens, reporting 4,800 total at the end of the decade, when populations in most other small towns were declining.

In November 1931, one of the most intense gun battles happened at the historic Elms Hotel. Four robbers attempted to hold up the hotel and managed to flee by automobile, which were followed by local law enforcement. Gunshots were exchanged in the hotel lobby and veranda. The four criminals fled to nearby Kansas City, but were later apprehended.

In 1932, Mafia gangster Lonnie Affronti shot Azalea Ross and her husband in an ambush shoot-out on Route 10. Ross was the chief witness in a narcotics trial against Affronti. The gangland aided in hiding Affronti for five years before he was captured in Brooklyn, New York, in 1937. One of his accomplices during the shoot-out, Charley Harvey, was apprehended and killed himself in the city jail a short time later. 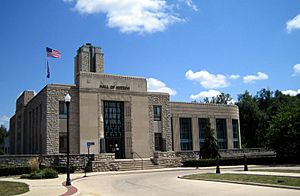 The present city hall, the Hall of Waters, was constructed between 1936 and 1938 by architects Keene & Simpson above the Siloam and Sulpho-Saline Springs. Citizens gathered on May 27, 1936, amongst national attention when the cornerstone of the Hall of Waters was lowered in place. CBS transmitted the event to 62 stations across the country. The local newspaper recorded many well-known names of the present time, including Hollywood B-movie actress Evalyn Knapp, artist Thomas Hart Benton, and author Homer Croy.

In 1937 the structure was partially complete, and the water bar in the lower level opened, providing mineral waters to health-seekers and visitors alike. In the following months the mineral water pool was opened, along with male and female hydrotherapy departments. A two-story hall had also been erected where the minerals were made available at fountains. The first floor contained the women's bath department, sunroom, covered porch, grand foyer, management office for the springs, and the chamber of commerce.

The swimming pool was large enough to met standards for championship meets. In the south wing were the special hydrotherapy departments devoted to research for the waters' medicinal values. The bottling department was located on the east side of the north wing, which shipped five varieties of bottled mineral water to locations all over the world.

On Election Day 1948, Harry S. Truman spent the night at the Elms Hotel when it appeared that he was losing his re-election bid to Republican Thomas E. Dewey. However, in the wee hours of the morning, he was awakened by his aides informing him that he had, in fact, won the election. He was whisked away to Kansas City. He later was photographed at Union Station in St. Louis holding a copy of the Chicago Tribune that famously proclaimed "Dewey Defeats Truman."

Flooding caused issues in 1955, and a dike was constructed, which resulted in the elimination of the stone terraces and walkways at Siloam Park, to protect the Hall of Waters from further flood damage by the nearby Fishing River. There were subsequent floods in the late 1960s, 1993, and 2015.

The late 1950s and early 1960s proved difficult times for the city due to the severe decline in popularity of the resort spa town. By 1967, the bottling operations had lost $25,000, and the city decided it was time to put their mineral water history behind them and move forward to new horizons. As of 2008[update], however, Excelsior Springs has licensed the rights to the mineral water to Excelsior Springs Bottling Company to allow for commercial bottling and distribution of the historic water.

The actor Michael Douglas had his second starring role in a movie, Adam at Six A.M., which was released in 1970. The movie was filmed in Excelsior Springs, as well as in Cameron, Missouri. In 1974, the National Civic League selected Excelsior Springs as an All-America City, reinvigorating this small town somewhat. The Greater Excelsior Springs Area conducted centennial celebrations in 1980.

All content from Kiddle encyclopedia articles (including the article images and facts) can be freely used under Attribution-ShareAlike license, unless stated otherwise. Cite this article:
Excelsior Springs, Missouri Facts for Kids. Kiddle Encyclopedia.