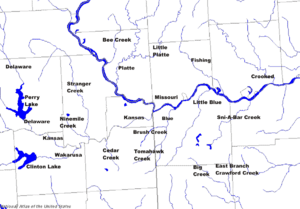 The Fishing River is a 39.0-mile-long (62.8 km) tributary of the Missouri River in western Missouri in the United States. It rises in the northeastern extremity of Kansas City in Clay County and flows generally eastward and southeastward through Clay and southeastern Ray counties, past the town of Mosby. It joins the Missouri River about 3 miles (5 km) south of the town of Orrick.

Downstream of Mosby, it collects the East Fork Fishing River, which rises at the town of Lawson and flows 20.6 miles (33.2 km) generally southward through Ray and Clay counties, through the resort community of Crystal Lake and past the town of Excelsior Springs.

Fishing River was named for the fact it contained an abundance of fish.

In 1808, William Clark of the Lewis and Clark Expedition established Fort Osage along the Missouri near the mouth of the Fishing River. The fort became a center of trade among European settlers and Native Americans in the region.

All content from Kiddle encyclopedia articles (including the article images and facts) can be freely used under Attribution-ShareAlike license, unless stated otherwise. Cite this article:
Fishing River Facts for Kids. Kiddle Encyclopedia.