Richmond is a city in Ray County, Missouri, and part of the Kansas City metropolitan area within the United States. The population was 5,797 at the 2010 census. It is the county seat of Ray County.

Richmond was platted in 1828. The community was named after Richmond, Virginia. A post office called Richmond has been in operation since 1828.

The Ray County History Museum houses both the Ray County Historical Society and the library of the Ray County Genealogy Association. The large, two-story red brick building was built in 1910 as the Ray County Poor Farm with separate wings for male and female residents, and is listed on the National Register of Historic Places. The museum's many rooms are filled with themed exhibits displaying artifacts from the Civil War, World War 1, World War 2, Mormon history, and local artifacts illustrating life on historical homesteads. According to local lore, the museum building is a site of suspected paranormal activity. 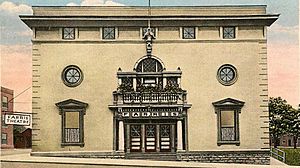 The Farris Theatre, which was designed by the prominent Kansas City architects Shepard and Farrar, and originally opened as the Dougherty Auditorium in 1901, is listed on the National Register of Historic Places. Today it is owned and operated by the Friends of Farris Theatre, Inc, a non-profit that organizes both live performances and showings of digital cinema movies. The theater is located within the Farris Arts District. The Arts District also includes the Hall for Arts Education and the Gallery and Museum for Fine Arts, which are housed in historic buildings originally built for the The Order of Knights of Pythias and Fraternal Order of Eagles.

The city has approximately 60 acres of parkland distributed across five public parks. Southview Park is the largest city park with 35.3 acres, and its facilities include a public outdoor swimming pool and a community amphitheater. Cevie Due Park is the site of the city's skate park. The centerpiece of Maurice Roberts park is a decommissioned Lockheed T-33 jet trainer airplane on outdoor display. Hamann Park is the newest park in the system, and is currently under development; plans include a nature walk through the mostly wooded six acre site.

In addition to parks, the city operates a gymnasium. Now part of the city hall complex, it was originally built in 1955 as a gym for the Richmond High School.

Richmond is home to a semi-private 18-hole golf course. The well-regarded course was designed in 1969 by Chet Mendenhall, who was a founding member of the Golf Course Superintendents Association of America (GCSAA).

The Ray County Library was officially formed by voters in 1946, and has been at its present location of 215 East Lexington St since 2004. The facilities include a genealogy room, a community room and a computer training lab.

All content from Kiddle encyclopedia articles (including the article images and facts) can be freely used under Attribution-ShareAlike license, unless stated otherwise. Cite this article:
Richmond, Missouri Facts for Kids. Kiddle Encyclopedia.