Chillicothe is a city in the state of Missouri and the county seat of Livingston County, Missouri, United States. The population was 9,515 at the 2010 census. The name "Chillicothe" is Shawnee for "big town", and was named after their Chillicothe, located since 1774 about a mile from the present-day city.

History of Chillicothe and Livingston County 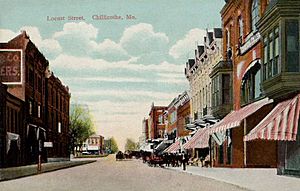 This territory was originally settled by indigenous peoples of the Americas. The Osage and Missouri were in the territory at the time of earliest European contact, which was mostly by French explorers and traders. By 1800 the Shawnee and Iowa had migrated here. The Shawnee came from the Ohio Country, where they had been under pressure before the American Revolution from aggressive Iroquois and later encroaching European Americans. Displacing the Osage, the Shawnee had a major village known as Chillicothe about a mile from the present-day city. Chillicothe was also the name of a major band of the tribe. Other Native American tribes in the area were the Sac and Fox, and Pottawatomi, all of whom hunted in the area.

In the early 19th century, European-American migration to Missouri increased. The original survey of Chillicothe by United States citizens was filed for record August 31, 1837, and a resurvey of the same was filed August 5, 1859. Chillicothe was incorporated as a city by an act of the General Assembly, approved March 1, 1855. It was selected as the County seat by commissioners and the first term of the county court began on May 7, 1838. In August of that year an order was made to erect the first Court House, the cost not to exceed $5,000, in the Public Square; The first circuit court for the trial of civil and criminal causes was held on the 3d of July 1887.

Livingston was settled by emigrants from the older counties and others from the Upper South states of Kentucky and Tennessee, as well as Ohio and other "Old Northwest" states, as the westward migration continued. Prior to completion of the Hannibal & St. Joseph Railroad in 1859, the city was minimally developed with cheap frame houses, with little pretense of architectural beauty or design. The building materials being hewed and sawed from the oak and walnut timber surrounding the town, as timber originally covered the site.

The railroad gave an impetus for town improvements. Soon two and three-story brick business buildings were constructed in place of the former frame structures. From 1865 to 1870, the city improved rapidly, then a lull lasted until 1875, when the erection of the beautiful three-story, $36,000 school building was started, now known as "Middle School." From that time on Chillicothe made a slow, steady growth up to 1886, when the Chicago, Milwaukee & St. Paul Railroad was built through here. That year also saw the introduction of the "Water Works" and electric lights. The city continued to modernize in the early 20th century.

The Missouri Training School for Girls

The Chillicothe R-II School District provides preschool through 12th grade education as well as some other educational programs to students in and around Chillicothe.

Other programs and campuses

All content from Kiddle encyclopedia articles (including the article images and facts) can be freely used under Attribution-ShareAlike license, unless stated otherwise. Cite this article:
Chillicothe, Missouri Facts for Kids. Kiddle Encyclopedia.