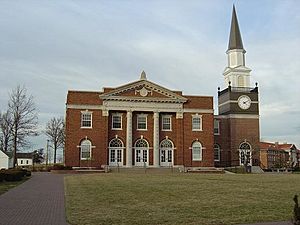 Gano Chapel from the Quad in 2004 after the clock tower had been repaired following the 2003 tornado. 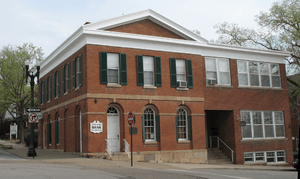 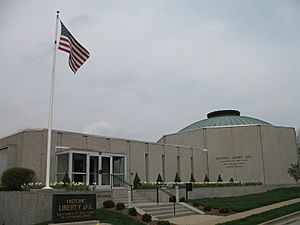 Liberty was settled in 1822, and shortly later became the county seat of Clay County. The city was named for the American concept of liberty.

In 1830, David Rice Atchison established a law office in Liberty. He was joined three years later by colleague Alexander William Doniphan. The two argued cases defending the rights of Mormon settlers in Jackson County, served Northwest Missouri in Missouri's General Assembly, and labored for the addition of the Platte Purchase to Missouri's boundaries.

In October 1838, the two were ordered by Governor Lilburn Boggs to arrest Mormon prophet Joseph Smith Jr. at the Far West settlement in Caldwell County. Immediately after the conclusion of the Mormon War, Smith and other Mormon leaders were incarcerated at the Liberty Jail for the winter as Doniphan labored for a quicker trial date. Although Doniphan led a force of Missouri volunteers ordered to capture the leaders, he defended Joseph Smith in trial and won him a change in venue. While en route to their new venue, Smith and his followers escaped and left Missouri for the new Mormon settlement in Nauvoo, Illinois.

There were 10,582 households, of which 38.2% had children under the age of 18 living with them, 56.4% were married couples living together, 11.0% had a female householder with no husband present, 4.0% had a male householder with no wife present, and 28.6% were non-families. 23.4% of all households were made up of individuals, and 8% had someone living alone who was 65 years of age or older. The average household size was 2.63 and the average family size was 3.11.

Major employers in Liberty include the Hallmark distribution warehouse. Liberty is also home to the operations headquarters for Ferrellgas, the 2nd largest retail provider of propane in the United States. The B&B Theatres corporate office is located in Liberty, the 7th largest theater chain in the U.S. While technically not in Liberty, the Ford Kansas City Assembly Plant is a major employer in nearby Claycomo.

According to the town's 2016 Comprehensive Annual Financial Report, the top employers in the city are:

Liberty has a public library, a branch of the Mid-Continent Public Library.

Liberty is also home to William Jewell College, a private, four-year liberal arts college of more than 900 undergraduate students that was founded in 1849.

All content from Kiddle encyclopedia articles (including the article images and facts) can be freely used under Attribution-ShareAlike license, unless stated otherwise. Cite this article:
Liberty, Missouri Facts for Kids. Kiddle Encyclopedia.