Cape Girardeau ( French: Cap-Girardeau colloquially referred to as "Cape") is a city in Cape Girardeau and Scott counties in the U.S. state of Missouri. It is located approximately 115 miles (185 km) southeast of St. Louis and 175 miles (282 km) north of Memphis. As of the 2010 U.S. Census, the city's population was 37,941, making it the 16th-largest city in Missouri, and the largest city in Southeast Missouri. An emerging college town, it is the home of Southeast Missouri State University. 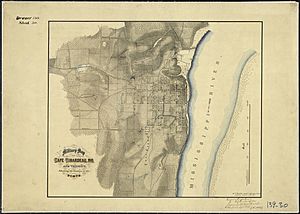 Map of Cape Girardeau and vicinity, showing location of its forts (September 1865).

The city is named after Jean Baptiste de Girardot, who established a temporary trading post in the area around 1733. He was a French soldier stationed at Kaskaskia between 1704–1720 in the French colony of La Louisiane. The "Cape" in the city name referred to a rock promontory overlooking the Mississippi River; it was later destroyed by railroad construction. As early as 1765, a bend in the Mississippi River, about 60 miles (97 km) south of the French village of Ste. Genevieve, had been referred to as Cape Girardot or Girardeau.

The settlement of Girardeau is said to date from 1793 when the Spanish government, which had acquired Louisiana in 1764 following the French defeat in the Seven Years' War, granted Louis Lorimier, a French-Canadian, the right to establish a trading post. This gave him trading privileges and a large tract of land surrounding his posorimier was made commandant of the district and prospered from the returns on his land sales and trade with indigenous peoples, such as the Ozark Bluff Dwellers and the Mississippian people.

Also in 1793, Baron Carondelet granted land near Cape Girardeau to the Black Bob Band of the Hathawekela Shawnee, who had migrated from across the Mississippi River. The Band became known as the Cape Girardeau Shawnee. They successfully resisted removal to Indian Territory with the rest of the Shawnee tribe until 1833.

In 1799, American settlers founded the first English school west of the Mississippi River in Cape Girardeau at a landmark called Mount Tabor, named by the settlers for the Biblical Mount Tabor.

The town of Cape Girardeau was incorporated in 1808, prior to Missouri statehood. It was reincorporated as a city in 1843. The advent of the steamboat in 1835 and related river trade stimulated the development of Cape Girardeau as the biggest port on the Mississippi River between St. Louis, Missouri and Memphis, Tennessee.

During the Civil War, the city was the site of the Battle of Cape Girardeau on April 26, 1863. The Union and Confederate armies engaged in a minor four-hour skirmish, each sustaining casualties generally believed to be in the low double-digits.

For years travelers had to use ferries to cross the Mississippi River from Cape Girardeau. In September 1928 a bridge was completed between Missouri and Illinois. Built to accommodate cars, it was 20 feet (6.1 m) wide under standards of the time.

The Old Federal Courthouse, located at Broadway and Fountain Streets and built in the late 1940s, was the subject of a U.S. Supreme Court case when it was being developed. In United States v. Carmack, 329 U.S. 230 (1946), the Court upheld the federal government's authority under the Condemnation Act of 1888 to seize land owned by a state or locality.

The City of Cape Girardeau was recognized in January 2008 by First Lady Laura Bush as a Preserve America Community for its work in surveying and protecting historic buildings, as well as .

The city is known to some as "The City of Roses" because of a 9-mile (14 km) stretch of highway that was once lined with dozens of rose bushes. Although there used to be many prominent rose gardens around the community, few of these gardens have been maintained. The city is also known as "Cape Girardeau: Where the River Turns a Thousand Tales," due to the history of the town and the Mississippi River. 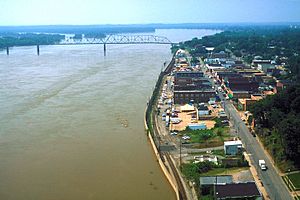 Waterfront of Cape Girardeau along the Mississippi River during the Great Flood of 1993.

Numerous murals commemorate the city's history. The largest is the Mississippi River Tales Mural, located on the city's downtown floodwall. Covering nearly 18,000 square feet (1,700 m2), it spans the length of the downtown shopping district and features 24 panels. Behind the floodwall lies the Riverfront Park of Cape Girardeau Missouri, where riverboats dock and visitors can view the Mississippi River.

There are 39 historic sites in Cape Girardeau that are listed on the National Register of Historic Places. Of these, eight are historic districts, such as Cape Girardeau Commercial Historic District, which was listed in 2000 and includes multiple contributing properties. The growth of the town can be documented through Sanborn Maps, over 80 of which are available online. Other landmarks include the Fort D Historic Site and the Confederate War Memorial.

Cape Girardeau has a humid subtropical climate (Köppen Cfa) with four distinct seasons and is located in USDA Plant Hardiness Zone 6b. Winter typically brings a mix of rain, sleet, and snow, with occasional heavy snowfall and icing. The city has a January daily average of 33.1 °F (0.6 °C) and averages 14 days annually with temperatures staying at or below freezing; the first and last freezes of the season on average fall on October 23 and April 7, respectively. Summer is typically hazy, hot, and humid with a July daily average of 78.6 °F (25.9 °C), and there is an average of 48 days a year with high temperatures at or above 90 °F (32 °C). The average annual precipitation is 46.8 inches (1,190 mm), with the rainiest season being spring. Extremes in temperature range from 107 °F (42 °C), which last occurred on June 29, 2012, down to −18 °F (−28 °C) on January 11, 1977.

There were 15,205 households out of which 26.0% had children under the age of 18 living in them, 38.8% were married couples living together, 12.8% had a female householder with no husband present, 4.0% had a male householder with no wife present, and 44.3% were non-families. 33.6% of all households were made up of individuals and 11.4% had someone living alone who was 65 years of age or older. The average household size was 2.27 and the average family size was 2.89.

The City of Cape Girardeau has established a Transportation Trust Fund that implements a .5% local sales tax. All of that money is used on transportation improvement projects. General projects are also included to keep the city’s streets in good condition.

In 2011, Cape Girardeau launched the Ride the City campaign. This dedicated 16 miles of bicycle lanes in city streets. There are lanes that are used only by bicycles and lanes where cars and bicycles can share space.

Buses are offered to the citizens by the Cape Transit Authority and have several stops throughout the city. A general admission is $2, senior citizens are $1, and children ages 6 and under are free. Special pick-ups can be made to those who are disabled and live within three-fourths of mile from a designated stop. Greyhound buses are also available for long distance transit. The Cape Girardeau County Transit Authority handles the city's taxi service.

All content from Kiddle encyclopedia articles (including the article images and facts) can be freely used under Attribution-ShareAlike license, unless stated otherwise. Cite this article:
Cape Girardeau, Missouri Facts for Kids. Kiddle Encyclopedia.