Clinton is a city in Henry County, Missouri, United States. The population was 9,008 at the 2010 census. It is the county seat of Henry County.

Clinton was laid out in 1836. The city was named for New York Governor DeWitt Clinton, a key promoter of the Erie Canal. A post office called Clinton has been in operation since 1850. 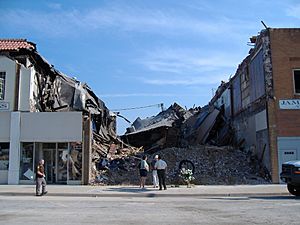 On June 26, 2006, a building in the historic town square collapsed; on the second and third floors, an Elks Lodge (Benevolent and Protective Order of Elks) meeting was taking place. The leader, Tony Komer, who was on the third floor of the building preparing a speech, is the only one who died. Nine people were pulled from the rubble, while the rest left on their own power. In the "Olde Glory Days" parade, which occurred less than one week after the accident, Komer was memorialized, and Elk's Lodge members from many parts of Western Missouri marched to show their support for the Clinton Lodge.

The downtown square serves as a center for community commerce and public affairs (The square also serves as a parking lot.) It features a central courthouse and numerous shops, stores, and eating facilities. More than a dozen churches are found in the community, a few of which predate 1900. Several important state highways intersect at Clinton, and a cluster of "big-box" stores, as well as several "national-chain" motels, are located in that area. Smaller motels are found on the outskirts of town on all sides. The several residential neighborhoods range from directly adjacent to the town square to lying a mile or more away. In terms of wealth, the neighborhoods go from solidly lower income, to middle-class ranch-house areas to a small, affluent borough, where larger lawns and brick-and-Tudor homes predominate.

Clinton lies at the western end of the Katy Trail, a 225-mile long state park used by cyclists, runners, and horseback riders. The rail trail is built on the path of the old Missouri-Kansas-Texas Railroad, which was abandoned between Clinton and Sedalia in 1989. The former Katy railroad from Clinton south to Nevada (MO) is still in operation by the Missouri and Northern Arkansas Railroad (RailAmerica). The city is also situated near Truman Lake which is widely known for its excellent boating, fishing, camping, and other related activities. Clinton is also home to two of the area's finer 18-hole golf courses.

September 12, 2007, the Tour of Missouri bicycle race began stage 2 from Clinton, Mo. [1] The initial take off began from the historic downtown square, and ended in Springfield, Mo.

Clinton has a public library, a branch of the Henry County Library.

All content from Kiddle encyclopedia articles (including the article images and facts) can be freely used under Attribution-ShareAlike license, unless stated otherwise. Cite this article:
Clinton, Missouri Facts for Kids. Kiddle Encyclopedia.