Carrollton was established in 1833. It obtained its post office in 1834. Carrollton's growth can be documented through Sanborn Maps, several of which are available online.

The town's recent claim to fame was its baseball team, the Carrollton Trojans, who finished 2nd in Class 2A baseball in their 2009-10 season. After advancing to the Final 4 in the MSHSAA Class 2A Baseball Championships, the Trojans defeated the Conway Bears (MO) 5-3, then fell to Crystal City (MO) in the title game, 10-1. The Trojans finished the season with a record of 19-3.

The town has a lending library, the Carrollton Public Library. 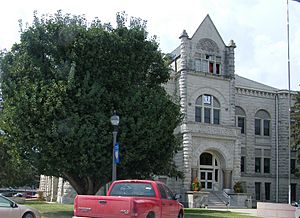 All content from Kiddle encyclopedia articles (including the article images and facts) can be freely used under Attribution-ShareAlike license, unless stated otherwise. Cite this article:
Carrollton, Missouri Facts for Kids. Kiddle Encyclopedia.