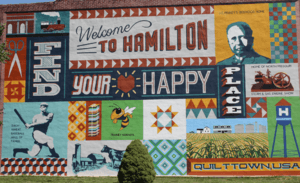 Hamilton is a city in northern Caldwell County, Missouri, and is part of the Kansas City metropolitan area within the United States. The population was 1,690 at the 2020 census. It is known as the hometown of James Cash Penney, who built a large apparel-related business, J. C. Penney, and the hometown of Jenny Doan, who has built a large quilting-related business, Missouri Star Quilt Co.

Hamilton, Missouri owes its existence largely to the Hannibal & St. Joseph Railroad. Prior to 1854 the area around Hamilton was unsettled prairie land belonging to the U.S. Government. With the coming of the railroad, the Hamilton Town Company was formed to develop a tract of land along the rails.

At first the name Prairie City was intended for the new community. However, Albert Gallatin Davis, a key member of the Town Company, chose Hamilton instead, in honor of two early Americans, Founding Father and first Treasury Secretary Alexander Hamilton, and Joseph Hamilton, an early American lawyer and military leader killed at the Battle of the Thames during the War of 1812.

The first house in Hamilton, fittingly, was built by Davis in the summer of 1855, as well as the first business, a general store, in 1857. The store would serve as Hamilton's first post office and Davis as the first postmaster in 1858. The Hannibal & St. Joseph Railroad was finally completed on February 14, 1859, and the first train arrived that day. A railroad depot was constructed by the fall of 1859, with Albert Gallatin Davis appointed the first railroad and express agent.

By the outbreak of the American Civil War, Hamilton consisted of about 25 homes and businesses. The town saw little involvement in the war, despite northwest and north-central Missouri being a hotbed of guerrilla warfare. The majority of the towns residents held strong pro-Union sympathies, with the few pro-Confederates among the populace forced to take an oath of allegiance. Being on the rail line made Hamilton a tempting target for Confederate "bushwhackers", so beginning in the fall of 1861, a company of the 50th Illinois Infantry arrived to help the local Home Guard unit defend the town.

Once the war ended Hamilton experienced a period of rapid growth, and was incorporated in 1868. At that time several new sections of land had been annexed into the original town plat and the population grew to several hundred. After a brief slowdown caused by the Panic of 1873, growth resumed. By the mid-1880s, Hamilton had two newspapers, the Hamiltonian and the News-Graphic, as well as two banks, two hotels, flour mills, grain elevators, and other businesses supported by a population of around 1,800. Coal mining became of some importance to the town's economy in the early 1880s. The Hamilton Coal Company was organized in the spring of 1882 and began mining operations the following year about two miles outside of the town. A railroad spur line was constructed to connect the coal field to the Hannibal & St. Joseph main line.

Penney High School, Hamilton, named in honor of the town's most famous native, has won several Missouri state sports championships. The boys won in football four times, and placed at the state level in basketball, track and field, and golf. The girls won the state track and field championshiip five years in a row, from 2007 through 2011, and won the basketball championship twice. The girls' softball team also placed in state competition.

Kellen Overstreet, a running back for Penney High School football team from 2012 to 2015, was chosen as a first-team all American by Parade Magazine.

Missouri Star Quilt Company has made Hamilton a national tourist destination for quilters. It was founded by the Doan siblings in support of their mother Jenny Doan's dream, and in tribute to her talent as a quilter made famous on YouTube. It has grown into a $20,000,000 per year business which owns 21 buildings in Hamilton and is part owner of three restaurants. It holds 3.2 acres of floor space in two warehouses in the south of Hamilton. MSQC also publishes a bi-monthly magazine called BLOCK. The business brings as many as 3,000 quilters to Hamilton in a month, and has helped transform the small town into a veritable quilter's paradise, with 12 new quilt shops and a sewing center for quilting retreats.

The active quilt business has helped a dozen restaurants to thrive in the town. Those near the center of town include J’s Burger Dive and Blue Sage, with a Subway just two blocks north at 301 N. Davis. Most of Hamilton's businesses are situated along the main street through town, Missouri Route 13, which is Davis Street but becomes S. Hughes Street just south of downtown.

The Caldwell County Food Pantry is at 303 N. Davis, and is open Mondays from 9 to 1. The largest church in town is United Methodist, located just north of downtown, with outreach programs including a large thrift store that is open on Thursdays 10-4 and Saturdays 9-12. Various churches help with utility emergencies, and the city hall (200 S. Davis) facilitates help given by Community Action Partnership.

There were 719 households, of which 34.4% had children under the age of 18 living with them, 46.2% were married couples living together, 13.6% had a female householder with no husband present, 4.2% had a male householder with no wife present, and 36.0% were non-families. 32.8% of all households were made up of individuals, and 14.9% had someone living alone who was 65 years of age or older. The average household size was 2.44 and the average family size was 3.08.

Public education in Hamilton is administered by Hamilton R-II School District, which operates one elementary school, one middle school, and Penney High School.

The city has a lending library, the Hamilton Public Library.

All content from Kiddle encyclopedia articles (including the article images and facts) can be freely used under Attribution-ShareAlike license, unless stated otherwise. Cite this article:
Hamilton, Missouri Facts for Kids. Kiddle Encyclopedia.