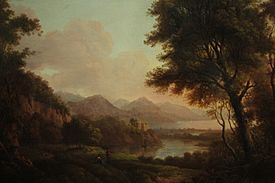 Loch Katrine (; Scottish Gaelic: Loch Ceiteirein or Loch Ceathairne) is a freshwater loch and scenic attraction in the Trossachs area of the Scottish Highlands. It is within the historic county and registration county of Perthshire and the district of Stirling. The loch is 13 kilometres (8.1 mi) long and 1 kilometre (0.62 mi) wide at the widest point and runs the length of Strath Gartney (Gaelic: Srath Ghartain). It is a popular destination for tourists and day visitors from Glasgow and nearby towns.

It is the fictional setting of Sir Walter Scott's poem The Lady of the Lake and of the subsequent opera by Gioachino Rossini, La donna del lago.

Watson judged the name Katrine to be "thoroughly Pictish" in origin, and to derive from an extension of the Celtic root *ceit, meaning "dark, gloomy place", a name referring to the loch's heavily forested shores.

The name Katrine has also been hypothesized to represent cateran, from the Gaelic ceathairne, a collective word meaning cattle thief or possibly peasantry. Historically this referred to a band of fighting men of a clan; hence the term applied to marauders or cattle-lifters, which Rob Roy MacGregor, a respectable cattle owner was erroneously accused of being. 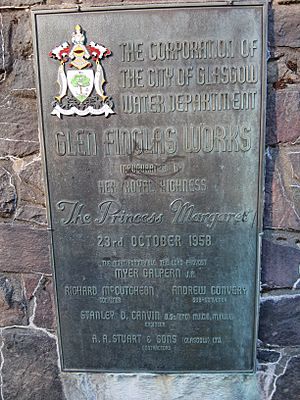 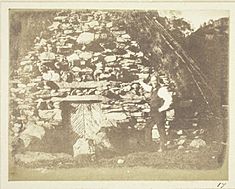 Scenery of Loch Katrine in 1844 by Henry Fox Talbot.

Robert Roy MacGregor was born at the head of the loch.

Loch Katrine is now owned by Scottish Water, and has been the primary water reservoir for much of the city of Glasgow and its surrounding areas since 1859. The water level has been artificially raised by around 1.8 metres (5.9 ft) - the loch can be drawn down by a maximum of 2 metres (6.6 ft). The water drawn down provides gravitational flow, using the Katrine aqueduct, to the Milngavie water treatment works via two 41 kilometres (25 mi) long aqueducts and 21 kilometres (13 mi) of tunnel. Milngavie itself is situated at almost 122 metres (400 ft) above sea level - sufficient to provide adequate water pressure to the majority of the city without the need for pumping. The system can deliver up to 230,000,000 litres (51,000,000 imp gal) a day. Construction was started in 1855 and the works was opened by Queen Victoria in 1859. The aqueduct project was built under the guidance of the eminent civil engineer John Frederick Bateman (1810–1889), an example of his engineering prowess that can still be seen working today. The second aqueduct was opened in 1901.

Water levels are supplemented via a dam and short tunnel from Loch Arklet, a reservoir located between Loch Katrine itself and Loch Lomond, beside the road to Inversnaid; this project was completed in 1914. A longer tunnel beneath Ben A'an which brings water from the Glen Finglas Reservoir was completed in 1958, with the dam being completed in 1965.

Oil-fired vessels are not permitted to sail its waters due to the danger of pollution to the drinking water of Glasgow. The steamboat SS Sir Walter Scott has provided sailings on the loch since 1900. It was coal-fired until 2007, when it was converted to use bio-diesel fuel, and continues to provide local tourist transport between Trossachs Pier and Stronachlachar during the summer. 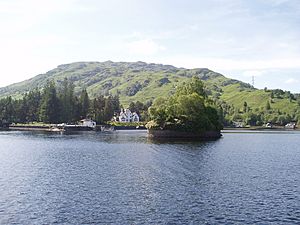 Stronachlachar from Loch Katrine with Factor's Isle in the foreground.

The main access points for Loch Katrine are either via Trossachs Pier at the loch's eastern end or Stronachlachar (Gaelic Sròn a' Chlachair "the headland of the stonemason") towards the western end of the loch. Trossachs Pier essentially consists of a parking space, pier, gift shop and cafe (Katrine Cafe) which are open from the first to the last sailing of the cruise boats, (normally 6pm).

On the northern shore are the Brenchoile hunting lodge and the farms Letter (Gaelic: Leitir), Edra (Gaelic: Eatarra "between them"), Strone (Gaelic: An t-Sròn "the nose"), Coilachra, Portnellan (Gaelic: Port an Eilein "port of the island") and Glengyle (Gaelic: Gleann Goill "glen of a lowlander"), on the southern are The Dhu (Gaelic: An Dubh "the black") at the western end of the loch, Stronachlachar, the Royal Cottage, Culligart and Glasahoile (Gaelic: Glas-choille "greywood").

The roads and paths do not circle the loch completely, as the southern road stops at Glasahoile.

There are several small islands in Loch Katrine such as Ellen's Isle (Gaelic: An t-Eilean Molach "the shingly isle"), the Black Isle and Factor's Island (Gaelic: Eilean a' Bhàillidh). 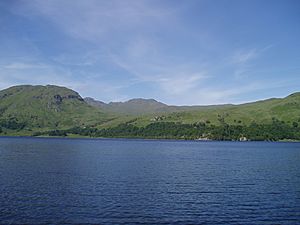 The view of Cruinn Bheinn, with Beinn Mheadhonach and Meall Gaothach to the right, on the northern shore of Loch Katrine.

All content from Kiddle encyclopedia articles (including the article images and facts) can be freely used under Attribution-ShareAlike license, unless stated otherwise. Cite this article:
Loch Katrine Facts for Kids. Kiddle Encyclopedia.