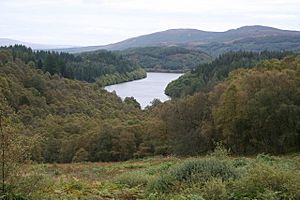 Loch Drunkie in the Achray Forest, seen from the Duke's Pass 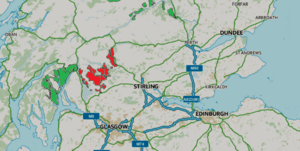 Queen Elizabeth Forest Park is a 19,665-hectare (48,590-acre) forest park in the Scottish Highlands which extends from the eastern shores of Loch Lomond to the mountains of Strathyre. The forest park is one of six such parks in Scotland, and was established in 1953, the year of the coronation of Elizabeth II. It is owned and managed by Forestry and Land Scotland.

The park is part of Loch Lomond and The Trossachs National Park and is a sparsely-populated region of mountains, hills, lochs and valleys. Most of the upland areas are bare and uncultivated, while much of the lowland is densely forested.

The main visitor centre for the area is The Lodge Forest Visitor Centre at Aberfoyle on the edge of the highlands on the eastern hillside of Craigmore (354 m, 1,161 ft). There are marked hiking trails and a car trail, the Three Lochs Forest Drive.

All content from Kiddle encyclopedia articles (including the article images and facts) can be freely used under Attribution-ShareAlike license, unless stated otherwise. Cite this article:
Queen Elizabeth Forest Park Facts for Kids. Kiddle Encyclopedia.