Blanefield is a settlement in Scotland contiguous with Strathblane's northwestern fringe. To the west is the volcanic plug Dumgoyne, Glengoyne Distillery and the Trossachs National Park. The West Highland Way—a long-distance trail—passes close to the village.

The Blane Water (Uisge Bhlàthain) has also been referred to as Beul-abhainn meaning "mouth-river" after the numerous burns merging. One of its tributaries, the Ballagan Burn passes over the waterfall the Spout of Ballagan which shows 192 alternate strata of coloured shales and limestone (including pure alabaster). The Blane flows into the Endrick, which, in its turn, flows westward to Loch Lomond.

A rise in population during the early 19th century was due in part to the development of a large calico printfield at Blanefield (employing 78 adults and 45 children under 14) and two bleachfields at Dumbrock (employing 67 adults and 14 children under 14) working 10–11 hours per day, 6 days a week. There is no sign of this industry in the village today which has a rural, picturesque aspect while the majority of parishioners now commute to work in neighbouring towns such as Bearsden, Glasgow, Milngavie, and Stirling. 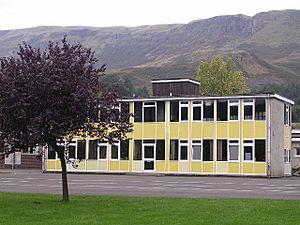 Blanefield Thistle F.C. is a local football team. There are clubs and organisations for tennis, bowls, darts, karate and snooker.

All content from Kiddle encyclopedia articles (including the article images and facts) can be freely used under Attribution-ShareAlike license, unless stated otherwise. Cite this article:
Blanefield Facts for Kids. Kiddle Encyclopedia.