Blair Drummond Safari Park is a family visitor attraction located near Stirling in Scotland. It opened to the public on 15 May 1970 and is home to over 350 animals, many of which roam freely or are kept in large enclosures in the 120-acre (49 ha) estate. The Safari Park is open from mid March until the end of October each year. The park is one of Scotland's busiest tourist attractions.

The original Blair Drummond House was built in 1715. Sir John Kay, a tea merchant from Glasgow, purchased the house and its surrounding land in 1916. Because he had no sons, Kay passed the property to his nephew Sir John Muir, the grandfather of the park's present owner Jamie Muir. The house was a family home until it was sold to the Camphill Movement, a charity that cares for people with special needs, in 1977. The current Blair Drummond House was built in a new location in 1872 by James Campbell Walker, and again in 1923 by James Bow Dunn after a fire destroyed the previous house.

Blair Drummond Safari Park was opened in 1970, with the help of Jimmy Chipperfield, one of Britain's first safari parks (Longleat Safari Park being the first, in 1966). 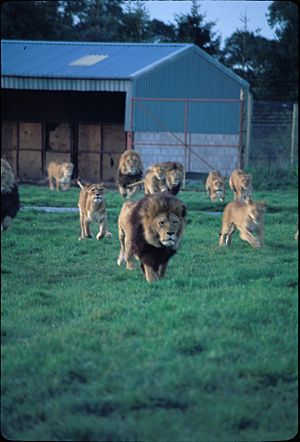 Driving through the lion reserve

Like many safari parks, Blair Drummond features reserve areas that visitors drive through in their own cars or as passengers on the park's "Safari Bus" to view free-roaming animals. Visitors can get up close to lions, zebra, rhino, camels and monkeys.

The first reserve features non-carnivorous native African species, such as Grant's zebra, Ankole-Watusi cattle, Guineafowl, Lechwe, Kudu and the Southern white rhinoceros. The rhinos are part of a Europe-wide breeding programme which began in 2004 with the arrival of three young rhinos from Kruger National Park: Dorothy (Dot), Graham and Jane. Dorothy and Graham have gone on to have five calves: in 2007, 2009, 2012 and 2014. Dot and Graham can still be seen at the park today.

The second reserve is home solely to African lions. They are also part of a Europe-wide breeding programme, with two of the current females having been born in the park. There is currently one male, Zulu, introduced in February 2016 through an exchange with Wildlands Adventure Zoo Emmen to ensure genetic diversity is maintained.

The optional third reserve, "Monkey Jungle", was opened to the public in 2015 and houses solely Barbary macaques. The monkeys were transferred to the park from Gibraltar in 2014 to reduce the problem they were beginning to cause to the peninsula's residents, and to prevent having to cull them as had been carried out previously. The Barbary macaque is listed as endangered by the IUCN Red List and in 2016 the park began to raise money for Barbary macaques being exploited for use as photo props in Morocco.

The fourth and final reserve houses herbivorous species native to Asia, such as Père David's deer, Bactrian camels, Nilgai, Axis deer and Eld's deer. In April 2016 the park welcomed the birth of two Père David's deer, a species now extinct in the wild.

The following areas and attractions can be found in the park: 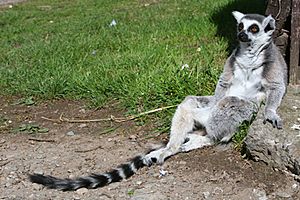 Lemur Land is reached by a bridge next to the Boat Safari, and is a place that has ring-tailed lemurs, brown lemurs, black lemurs and black-and-white ruffed lemurs. Visitors walk through this area and the lemurs roam free, with tall bushy trees and a network of thick ropes for them to play on. Several feed tables around the walkway let visitors get close to the lemurs. 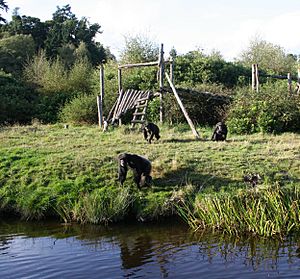 Visitors' view of Chimp Island from the boat safari

The Boat Safari next to Lemur Land takes visitors to view Chimp Island - an island home to a family of chimpanzees. Here the visitors are taken round the island on a boat by an experienced guide, as the chimps forage for food hidden in behavioural enrichment devices and in the undergrowth.

The safari park is home to a female african elephant named Mondula. She spends her day foraging around her enclosure and using the various pieces of enrichment provided for her by her keepers. On most days, if Mondula is willing, the keepers will engage the elephant in training sessions where she is rewarded with food when she demonstrates positive behaviours. If she is outside the visitors can get a closer look as Mondula presents her feet, mouth, ears and tail to the keepers for inspection and cleaning. The current elephant enclosure was opened by the Princess Royal in 2013, and was commended in the British and Irish Association of Zoos and Aquariums' annual awards in the category "best new habitat".

Multiple times a day the visitors can see some of the abilities of the birds of prey that reside at the park. Here, the birds are flown by the park's experienced bird trainers, who explain and demonstrate the birds' capabilities as they come into close quarters with the visitors. Birds here include Harris' hawks, eagle owls, vultures, falcons, kites and barn owls. 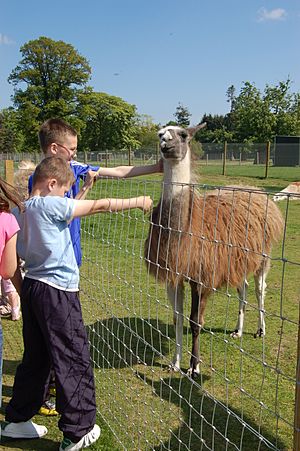 Viewing platforms are positioned throughout the park, which are wheelchair-friendly and allow visitors to view into some of the enclosures from an elevated position. They are located at the giraffe/ostrich enclosure, the lion reserve and the Amur tiger habitat.

The park has a large slide and playground, where visitors will find a pirate ship and adventure fort. They are all housed within a sand pit, part of which is under cover to offer shelter in wet weather. Near the sea lion building is the large slide, and near the boat safari there are pedal boats and a flying fox. Other rides and attractions including dodgems, a kids' dragon rollercoaster, a bouncy castle, face painting and a carousel.

Eating at the park

There is a restaurant and several snack outlets, and picnic tables are available for visitors who bring their own food and drinks. Visitors can also bring their own BBQ food and safari park will supply and light a Barbecue at no charge.

Throughout the day, the education team make their way around six of the enclosures, giving talks on the elephant, giraffes, tiger, rhinos, penguins and meerkats. The talks include information about the natural environments, behaviours and biology of the animals, as well as specific information on the individuals at the park. Some of the talks include a feeding and so may provide a good opportunity to see the animals active.

In addition, the zoo has both animal and education related volunteer programs. Animal volunteers are largely college and university students who require industry experience for their qualification. These volunteers help with the daily tasks of the zookeepers, including the mucking out and cleaning of animal enclosures, feed preparation, and implementing enrichment for animals. Education volunteers help with daily education of visitors, including working at touch tables, talking with visitors, helping with education talks for schools, and helping organize and plan events and fundraising.

Breeding successes at the park

Blair Drummond Safari Park is a member of British and Irish Association of Zoos and Aquariums (BIAZA) since 2004 and participates in coordinated breeding programmes with other zoos in the United Kingdom and Ireland for endangered animals.

Animals that have successfully bred in the park include:

In February 2010 staff at the park were alerted to one of their rhinos giving birth by a woman in Cyprus who was watching the rhino enclosure on the park's webcam.

Blair Drummond Safari Park promotes conservation through ‘Link to the Wild’, an initiative which raises awareness and funds for conservation projects through the donations made by visitors.

All content from Kiddle encyclopedia articles (including the article images and facts) can be freely used under Attribution-ShareAlike license, unless stated otherwise. Cite this article:
Blair Drummond Safari Park Facts for Kids. Kiddle Encyclopedia.