Church of the Holy Rude facts for kids

The Church of the Holy Rude is the medieval parish church of Stirling, Scotland. It is named after the Holy Rood, a relic of the True Cross on which Jesus was crucified. The church was founded in 1129 during the reign of David I, but the earliest part of the present church dates from the 15th century. As such it is the second oldest building in Stirling after Stirling Castle, parts of which date from the later 14th century. The chancel and tower were added in the 16th century.

Stirling Castle has long been a favoured residence of the Scottish monarchs, and was developed as a Renaissance palace during the reigns of the later Stewart Kings. The Church of the Holy Rude, adjacent to the castle, became similarly associated with the monarchy, hosting royal baptisms and coronations. It is one of three churches still in use in Britain that have been the sites of coronations. 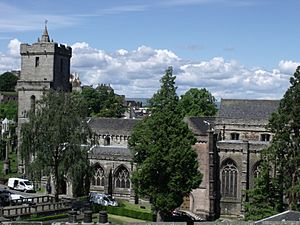 A view from the roof of Stirling Old Town Jail 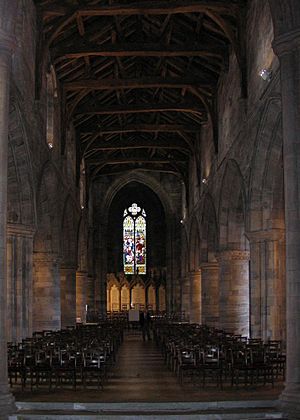 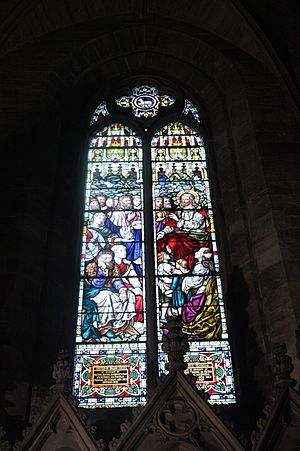 The church was founded in 1129 but nothing of this early structure now remains due to a fire in 1405.

Construction on the new nave had begun by 1414, and based on the evidence of carved heraldry the vault of the nave was completed between 1440 and 1480. Work on the chancel did not commence until 1507 and was completed around 1530 which was when the west tower was also extended to its current height. King James VI was crowned King of Scots in the church on 29 July 1567. Adam Bothwell, Bishop of Orkney performed the ceremony, and John Knox preached a sermon.

It is alleged that, in the Siege of Stirling Castle in 1651 by General Monk, during the Wars of the Three Kingdoms, the church and churchyard suffered damage from musket shots, which is still visible. However, all damage is opposite the south rampart of Stirling Castle, and as damage clusters around the slot windows, it is clearly just a "game" of soldiers firing from the castle to get the musket ball through the slot. Were it from an attacking force damage would be on the south side, which it is not. James Guthrie, who was later executed, was the minister at the time. Soon after, Guthrie with two or three elders appointed Robert Rule as Guthrie's successor which caused a schism in the congregation and a dividing wall was built which stood until 1936.

In 1940 the church was restored and the fine oak beam roof was re-exposed.

The fine parish church of the Holy Rood at Stirling was built in 1500, to replace the church of St Modan, which had been burned down. It is about 200 feet long, but is sadly marred internally by a wall which screens off the western part of the building. [This was removed in the 1930s]. A Second Charge was secured for the parish of Stirling in 1607. In 1656 the church was divided into two parts, each of which was fitted up as a separate place of worship. In 1731 a Third Charge was founded. This led to the growth of a third congregation, and, in 1840, the North Church was built for the services of the Third Charge.

There is an early record of a church built at Stirling by St Monenna, but it is not likely that it was a stone building. In 1463, when James III was King, the Hospital of St James was erected at the Stirling end of the bridge over the Forth. Near the bridge, somewhat later, was built a chapel of St Roque. In James IV's time Stirling acquired another hospital, which still exists. It attests to the munificence of Robert Spital, the King's tailor. During the same reign, in 1494, a house of the Grey Friars, dedicated to St Modan, was established in the town. King James IV lived much at Stirling, and it was he who set up one of its most notable foundations, that of the Collegiate Church of the Chapel Royal. It was dedicated to St Mary and St Michael, and was famed for its elaborate musical services. In the part of this parish that lies on the left bank of the Forth stand the ruins of St Mary's Augustinian Abbey of Cambuskenneth. It was founded by King David I in 1147, and had very wide possessions. Within its church there were altars of St Ninian and St Katherine. Of the Abbey buildings little now remains but the church tower. It is very complete. There is also an interesting monument erected by Queen Victoria to keep in mind her ancestors James III and his Queen, Margaret of Denmark, who lie buried in the Abbey Church. There were many altars and shrines in the Rood Kirk, and some of their names are well known. These include dedications to the Holy Trinity, St Mary, St Michael, St Anne, St Andrew, St James, St John the Baptist, St Ninian, St Salvator, St Peter, St Paul, St Laurence, St Katherine, St Modan, St Cuthbert, St Eloi, St Severinus, and St Aubert. In the Rood Kirk, on the 29th of July 1567, King James VI was crowned, having then attained the age of 13 months. 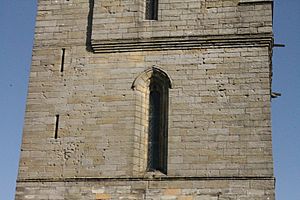 Musket ball damage on the north side of the Church of the Holy Rude, Stirling 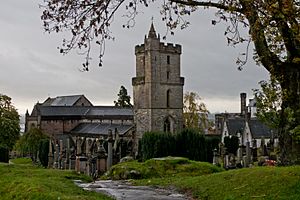 A view from the churchyard

There were in this parish Wells of St Mary, St John, and St Thomas. Stirling held fairs on Ascension Day, Roodmas Day, and Our Lady Day in Harvest. 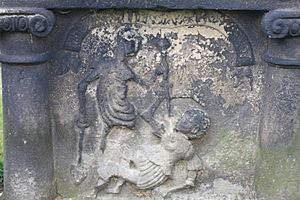 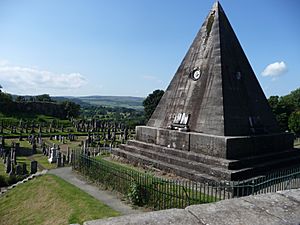 The Star Pyramid in the cemetery

The church has a historic churchyard lying primarily to the west and north-west of the church. Stones date from the 16th century.

The churchyard was extended in 1851, creating the fascinating Valley Cemetery to the north, divided from the old cemetery by only a path. This contains a series of statues by Alexander Handyside Ritchie to figures of the Reformation.

The old graveyard contains a unique stone with a carved depiction of body-snatching, marking the theft of Mary Stevenson (1767–1822) by James McNab, the local gravedigger who had buried her two days earlier, on 16 November 1822, aided by a friend, Daniel Mitchell. The body was passed to John Forrest, for dissection. The two men were caught, but released due to legal technicalities and a riot ensued. Mary's body was reburied and the stone carved to mark the strange event.

Graves of note in the old cemetery include:

To the north, under the castle ramparts

All content from Kiddle encyclopedia articles (including the article images and facts) can be freely used under Attribution-ShareAlike license, unless stated otherwise. Cite this article:
Church of the Holy Rude Facts for Kids. Kiddle Encyclopedia.