The Unknown Warrior facts for kids 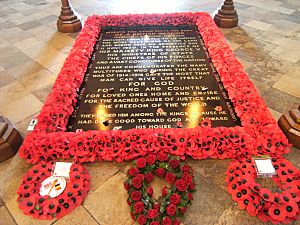 Tomb of the Unknown Warrior

The Unknown Warrior is a tomb of an unknown British soldier who was killed on the battlefield during World War I.

It has an inscription on it that is written by Herbert Ryle, Dean of Westminster.

The unknown warrior was awarded the United States Medal of Honor on October 17, 1921. This hangs on a pillar near his burial. The handles of the unknown warrior's tomb were lost, then found by a man in East London whilst digging up weeds.

All content from Kiddle encyclopedia articles (including the article images and facts) can be freely used under Attribution-ShareAlike license, unless stated otherwise. Cite this article:
The Unknown Warrior Facts for Kids. Kiddle Encyclopedia.