Mount Roskill is both a volcanic peak and the suburban area in the city of Auckland, New Zealand.

The mountain formed as a result of volcanic activity some 20,000 years ago. Its peak, located in present-day Winstone Park towards the southwest end of the suburb, is 110 metres in height - one of the many extinct cones which dot the isthmus of Auckland, all of which form part of the Auckland Volcanic Field. The scoria cone was built by fire-fountaining from two craters. Lava flowed from the base of the cone to the north and to the northwest. It was the site of a pā, and was known as Puketāpapa ("the flat-topped mountain" in Te Reo Māori) and as Pukewīwī. The main southern crater was excavated in 1961-1962 and filled with a water-supply reservoir. The reservoir is no longer in active service, and is only maintained as an emergency supply.

Since 2009 the extension of State Highway 20 has passed close to the cone. The effects of the new motorway on the cone had been the subject of significant discussion, and a major mitigation package had been proposed to reduce the impact of the motorway (and the continuation of the Waikaraka Cycleway that runs parallel to it).

The funding of this mitigation and the missing cycleway section was briefly in doubt in 2009, when a cost blowout to $2 million was criticised after Council had set aside $1.6 million. Cycling advocates from Cycle Action Auckland, the Mount Roskill Community Board Chairman Richard Barter and Councillor John Lister however noted various elements unrelated to the cycleway that had driven up the cost, such as a toilet block, bluestone walls, extensive landscaping and artwork, much of it related to Winstone Park itself, or the effects of the motorway. The cycle-path section itself was priced at only $300,000. The path section was finished after six months of construction work and it (and the park facilities) opened to the public on 25 July 2010.

The suburb, named after the Mount, is located seven kilometres to the south of the city centre, and is surrounded by the neighbouring suburbs of Three Kings, Sandringham, Wesley, Hillsborough and Mount Albert. The Mount Roskill shops are located at the intersection of Mount Albert and Dominion Roads.

In the 1920s, a new subdivision off Dominion Road was established. It was named the Victory Estate after notable First World War personnel.

One of the city's larger suburbs, it was largely farmland until after the Second World War. It was a separate borough from 1947 until local government reorganisation in 1989 amalgamated it with Auckland City.

In the past, Mount Roskill was referred to as the Bible Belt of Auckland, as it contained the highest number of churches per capita in New Zealand. The electorate was one of the last in the country to go "wet", in 1999, having formally been a dry area where the selling of alcohol was prohibited.

Mount Roskill is an ethnically diverse community with at least 54 different nationalities represented there, making it one of the most diverse suburbs in New Zealand.

Mt Roskill Library was built and opened to public in August 1977. It was refurbished and the floor area extended in November 2011. Mt Roskill Library has English, Maori, Chinese, Tamil, Arabic and Somali collections.

Dominion Road school is a decile 3 primary school on Quest Terrace. As of 2014, there were 332 students and the school principal was Marian Caulfield, who started in 2001. The school has 20 teaching spaces which are all multipurpose. It is close to the central city. 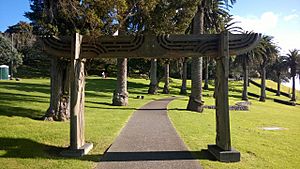 Mount Roskill has been home to many successful New Zealanders who attended the local schools. Among them are:

In 2007, the Mount Roskill Community Board commissioned a 176-page book titled Just Passing Through: A History of Mt Roskill (Jade Reidy) which covered the growth of the district from 1840 up until the present time. It identified the significant input of Mount Roskill residents internationally, such as athletics coach Arthur Lydiard in the chapter "How Sport Put Mt Roskill on the World Map."

All content from Kiddle encyclopedia articles (including the article images and facts) can be freely used under Attribution-ShareAlike license, unless stated otherwise. Cite this article:
Mount Roskill Facts for Kids. Kiddle Encyclopedia.